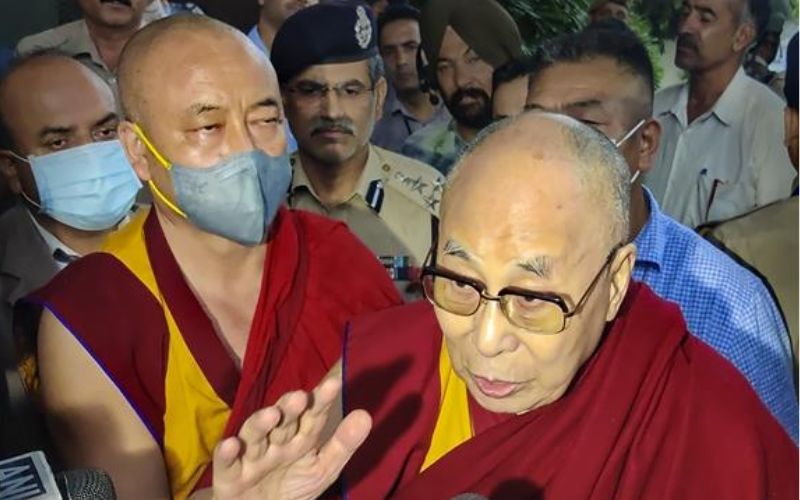 Jammu :  Tibetan spiritual leader the Dalai Lama on Thursday said that he is not seeking “independence” but meaningful autonomy and preservation of the Tibetan Buddhist culture.
Advocating resolution to all disputes through dialogue, he asserted that all human beings are equal and they need to rise above the narrow-minded approach of “my nation, my ideology” which is the main trigger for fights among people.

The Dalai Lama arrived here to a warm welcome by his followers who turned up in large numbers despite heavy rains. This was his first visit outside Dharamshala in Himachal Pradesh in the last two years. He is likely to visit Ladakh on Friday.

“Some Chinese hardliners consider me a separatist and a reactionary and always criticize me. But now, more Chinese are realising that the Dalai Lama is not seeking independence and only wishing China (to give) meaningful autonomy (to Tibet) and (ensure) preservation of Tibetan Buddhist culture, the 87-year-old spiritual leader told reporters.

Asked about China’s objection to his visit, the Dalai Lama said, “This is usual. The Chinese people are not objecting… more and more Chinese are showing interest in Tibetan Buddhism. Some of their scholars are realising that Tibetan Buddhism is very scientific. Things are changing.”

He expressed displeasure over the prevailing crisis in Sri Lanka. “My main message to the people is that we all are brothers and sisters and there is no point in fighting… the fight is triggered by narrow-mindedness when they start thinking (things) like ‘my nation, my ideology’,” he said.