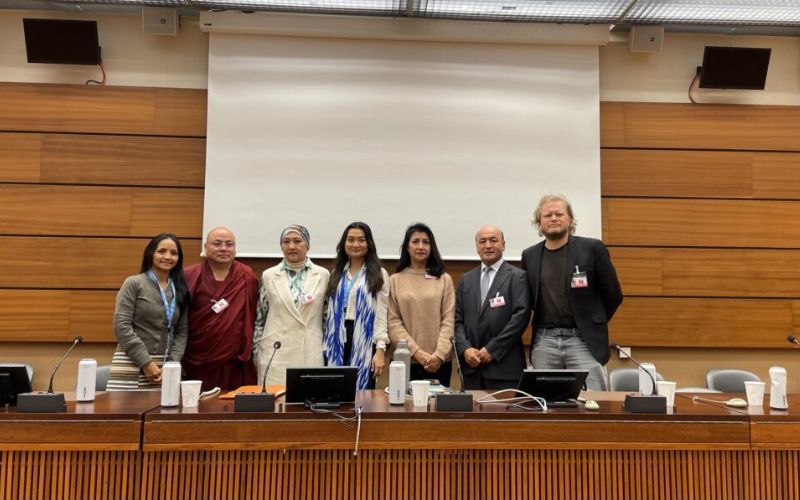 Testifying in the UN Human Rights Council premises Room XXV, Golog Jigme categorically explained various forms of torture that he was inflected by 16 different Chinese prison staffs since the day he was held in the Chinese detention on 23 March 2008. The Chinese authorities have arrested him thrice and had undergone “unthinkable” physical and psychological torment, said Golog Jigme in the event.

Golog Jigme also gave an overview of the current situation in Tibet China’s hard line assimilatory policies that systematically put the survival of distinct Tibetan culture and identity at stake. He said education policy and CCP’s systemic attack on Tibetan scholars, cultural and monastic institutes, are cause of serious concerns which call for a meaningful attention and intervention by the UN human rights council and its member states.

Referring to current deplorable situation due to China’s failure and mismanagement of COVID situation in Tibet, Golog Jigme said everyone across the world had undergone “unpredictable” and “difficult” situation caused by pandemic, however, it is “more difficult” “painful” and “unacceptable” when pandemic is used to further suppress Tibetans and misused to gain political control over people. In addition to stringent restrictions on freedom of expression and movement, absence of access to basic medical facilities, non-infected Tibetans are forcibly mandated to stay in an isolation center along with infected patients, said Golog Jigme. The so-called quarantine centers, falling short of food and basic medical services, are nothing more than “tool to further distress” Tibetans.

He urged the UN Human Rights Council and UN independent experts to visit Tibet “without any pre-conditions”. A visit to Tibet is the need of the time because the UN sees Tibet that China wants to show for so long now. In order to assess the ground reality, a visit to Tibet is “indispensable”, added Golog Jigme. He urged the council and UN member states to uphold the Charter and Universal Declaration of Human Rights in real concerted actions, not just only in words.

The camp’s survivors of Uyghur have shared personal accounts of Chinese atrocities and urged the member states to take the responsibility to bring China accountable for “crimes against humanity”.