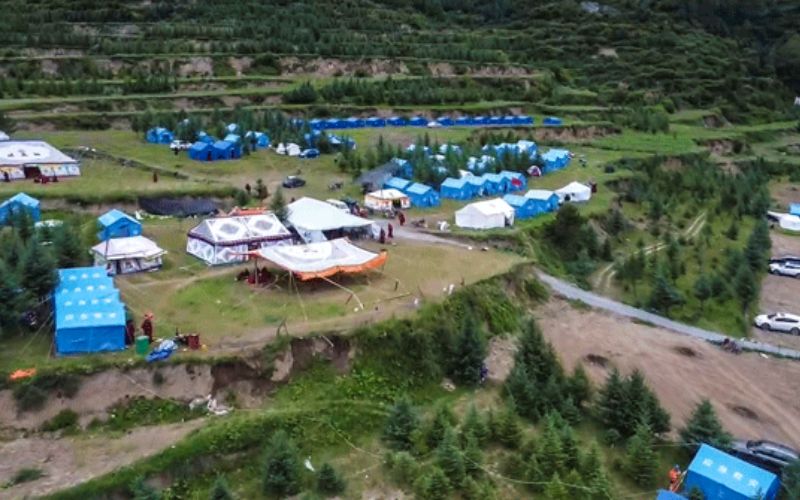 Lhasa: Monks from the Gyalrong Tsodun Kriti Monastery in northeastern Tibet do not know if they will receive help from local Chinese officials to rebuild after the structure was destroyed by an earthquake last month, a person with knowledge of the situation said on Tuesday.

The destruction of the Gyalrong Tsodun Kriti Monastery, which is about 85 kilometers (53 miles) from Barkham, forced 290 monks who reside there to move to a temporary makeshift location, the Tibetan source said. Neither monks nor residents know if the local Chinese government will provide assistance to rebuild the monastery, the Tibetan added.

“With assistance from nearby monasteries and towns, the Tsodun Monastery has now completely moved to a temporary tent, and all daily religious activities are being performed [there],” the source said, adding that wet weather conditions have made the situation tougher.

“Many local Tibetans in the region still continue to live in temporary tents,” said the source. Government rescuers did not reach Barkham until June 13, three days after the initial quake. After they arrived, Chinese authorities dismissed Tibetan civilians and monks who provided food, water and tents to survivors, RFA reported earlier.

Authorities then imposed a strict clampdown on information from the area, forbidding residents to post reports or photos about the earthquake on social media. Chinese state media on June 10 reported one resident had been injured in the quake, with 25,790 survivors transferred and resettled.

Earthquakes are common on the Tibetan plateau. Last year a 7.3-magnitude quake struck Matoe (Maduo) county in the Golog Tibetan Autonomous Prefecture of Qinghai province, killing 20 people and injuring 300 others.

At that time, authorities blocked social media reporting, telling citizens to report injuries and deaths only to the government rather than sharing the information online.