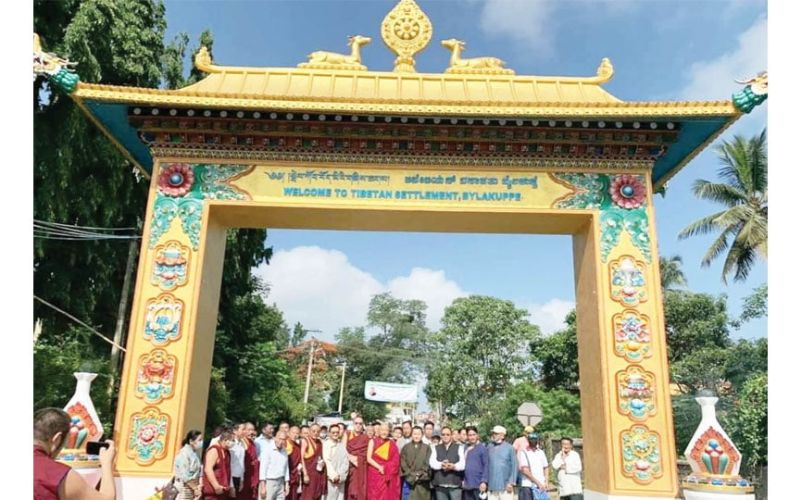 Bylakuppe: An attractive arch gate depicting eight auspicious symbols of Tibetan Buddhism has been constructed at the entrance of the Tibetan settlement in Bylakuppe and was inaugurated by Sikyong Penpa Tsering, President of the Central Tibetan Administration on June 1.

The two pillars of the main entrance arch have eight auspicious symbols of Tibetan Buddhism (four on each pillar) which have been sculpted by artists from Nepal. The entrance arch, constructed on the road leading to Tibetan settlement is sculpted on the two golden coloured pillars and filled with relevant colours.

The eight auspicious symbols sculpted on the pillars are: The Precious Parasol (which gives protection from all evil), the White Conch Shell (represents the fame of Buddha’s teachings that spread in all directions like the sound of the conch shell), the Two Golden Fish (symbolise being saved from the ocean of earthly life and suffering), the Knot of Eternity (represents the intertwining of wisdom and compassion, the perfection of knowledge); the Vase of Great Treasures (a traditional symbol of good fortune representing the perfect nature of the dharma, longevity and prosperity); the Victory Banner (signifies the victory of the enlightened teachings, knowledge over ignorance, overcoming all hindrances and the attainment of happiness); Lotus Flower – one of Buddhism’s most significant symbols and Wheel of Dharma, which represents the Noble Eightfold Path of the Buddhadharma. The wheel that leads to perfection.

Information supplied by Star of Mysore