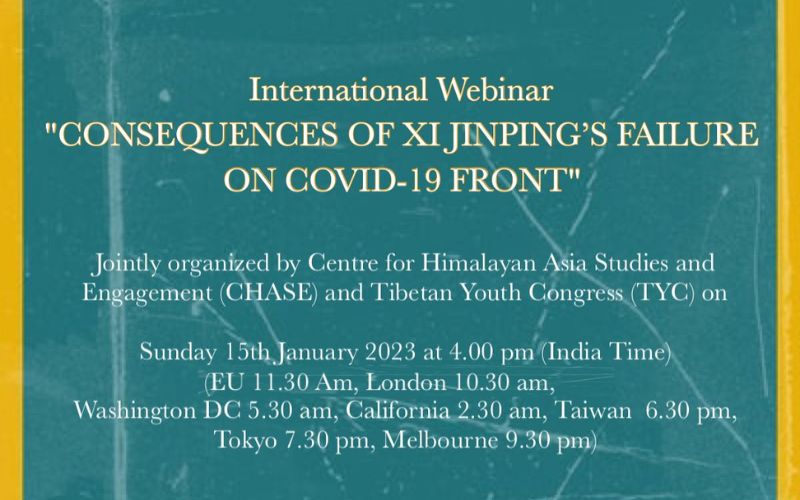 The Tibetan Youth Congress (TYC) from Dharamshala and the Centre for Himalayan Asia Studies and Engagement (CHASE) of New Delhi are jointly organizing International Webinar on Saturday 15th January 2023 at 4.00 pm (IST) on topic “Consequences of Xi Jinping’s Failure on Covid-19 Front”.

The moderator of this webinar will be Mr. Vijay Kranti, Chairman of CHASE, New Delhi. He attributed the near-total international silence on Tibetan self-immolations to the fear of economic losses states may face by calling China out.

China’s mismanagement of Covid in Tibet revealed the extreme human costs when authoritarian police states prioritize censorship and social control over the wellbeing of the people, stated ICT.

According to a recent HRW report, the Chinese government tightened its Covid-19 restrictions, putting hundreds of millions of people under repeated, unpredictable lockdowns. Officials used barbed wire, metal bars, and large barriers in some cases to keep people from leaving their homes. Even during an earthquake, residents in Sichuan province were unable to leave their homes.

“Others reported violations of their privacy, censorship, disruptions to their livelihoods, and government brutality as police and health officials kicked and shoved people who refused to comply with Covid restrictions. Residents in Tibet and Xinjiang reported even more draconian Covid-19 controls imposed by local authorities who were already severely restricting rights”, stated report.