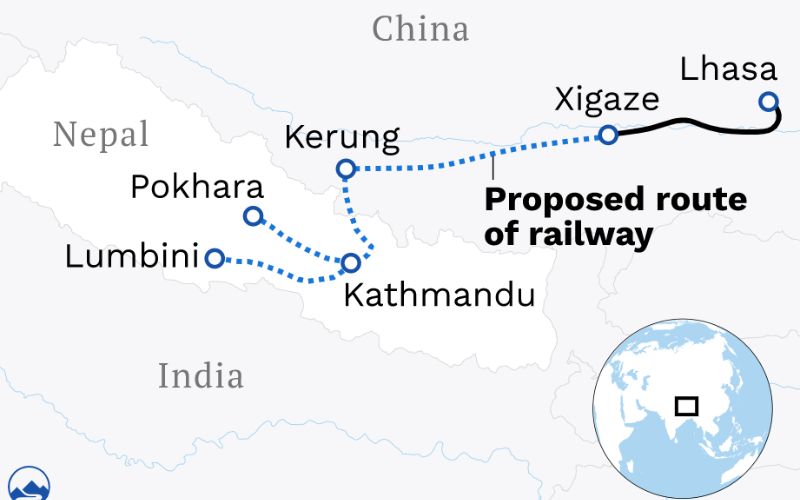 On August 10, China announced that within a year it will start a feasibility study for the ambitious Tibet-Nepal Railway project. The announcement, which came during Nepal foreign minister Narayan Khadka’s visit to China, also revealed that China will pay for the study.

The proposed 170-kilometre railway, part of the Belt and Road Initiative, will link Kerung in southern Tibet to Nepal’s capital Kathmandu, entering Nepal in Rasuwa district. The plan is to eventually extend the railway to India.

People familiar with the matter told The Third Pole that building the railway from Kerung to Kathmandu would cost about 38 billion yuan ($5.5 billion), almost equal to total government revenues for the country in 2018. Although only one-third of the total length falls on the Nepal side, this stretch would account for almost half of the costs due to the difficult geology and climate.

The estimated cost of the feasibility study has not been made public, but China has announced that it will provide RMB 800 million ($118 million) to Nepal in 2022.

Experts say this could be a defining move for the Tibet-Nepal Railway, which has been on hold for years with Nepal reluctant to fund the study and China reticent about funding it.

“The feasibility study will do two important things: first it will determine the route, including ground and bridge proportion. And second, [it will determine] the type of railway that needs to be built – high speed or slow,” said Paribesh Parajuli, an engineer who worked as a consultant at the Department of Railways until 2019.

“Technically this will be one of the world’s toughest railways to construct as it needs to cross the lofty and fragile Himalayan range, but with China’s technological prowess it is possible as they have already built railways in higher altitudes in Tibet than the proposed Nepal-China railway,” said Aman Chitrakar, spokesperson for Nepal’s Department of Railways.