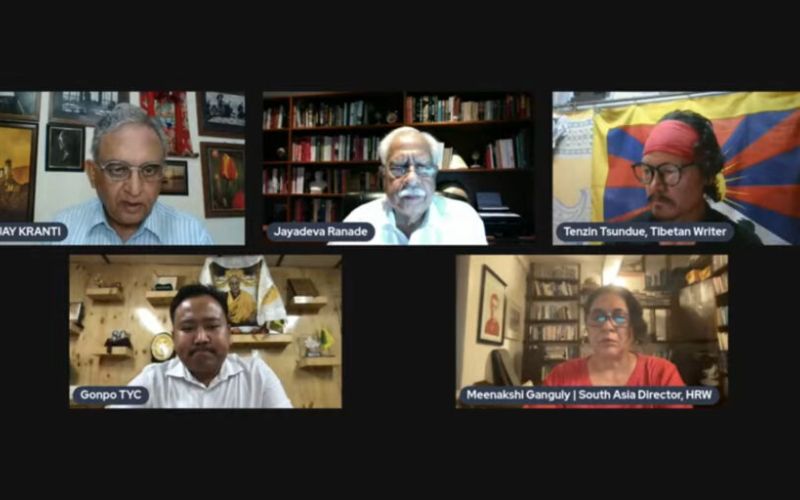 New Delhi: A group of experts on China, Tibet and Human Rights who discussed ‘Human Rights Situation Inside Tibet’ in a webinar on 07 June 2022. President Xi Jinping’s desperate move to wipe out Tibetan language and to occupy the Tibetan religious system is a clear admission of the fact that despite 72 years long colonial control over Tibet the Chinese rulers have failed in winning the loyalty of Tibetan masses. It also proves that resistance among the Tibetan people against their Chinese masters is still alive.

The webinar was organized jointly by the Centre for Himalayan Asia Studies and Engagement (CHASE) and Tibetan Youth Congress (TYC) on Tuesday the 7th June evening and was 13th in the ongoing series of international webinars on Tibet since April 2021. Three main speakers at this webinar were Jaydeva Ranade, a famous expert on China and President, Centre for China Analysis and Strategy; Meenakshi Ganguly, South Asia director at Human Rights Watch; and Tenzin Tsundue, a leading Tibetan poet, writer and activist.

Ranade underlined Chinese rulers’ worries and uneasiness about Tibet. He pointed out that like in the case of Panchen Lama they don’t want to reach a situation where there are two Dalai Lamas after the demise of present Dalai Lama. That is why they are trying to capture and tame the entire Tulku system in Tibet. Their other worry is the undying spirit of Tibetan people. They are shocked to note that despite the absence of Dalai Lama from Tibet for over six decades, the new generations have maintained their faith in Buddhism, Dalai Lama and their cultural identity.

Tenzin Tsundue said that China is not interested in the Tibetan people but is deeply interested in the vast mineral resources of Tibet. He said that the real power house of China’s present prosperity and industrial progress is the mineral resources of its three major colonies Tibet, East Turkistan (Xinjiang) and South Mongolia. From Tibet the Chinese companies are mining out precious minerals like Lithium, Copper, Gold and Rare Earths.

In his concluding comments and vote of thanks, Gonpo Dhundup said that the Tibetan struggle is not just limited to restoration of human rights. The real issue is Tibetan independence. Referring to Chinese President Xi Jinping’s current policy of complete assimilation of Tibetans into the Chinese Han identity, he said that this also shows the failure of Chinese governments in winning over or taming the hearts of Tibetan people. China’s new policy of wiping out Tibetan language and draconian restrictions on people of Tibet is a formal testimony to the fact the Tibetan resistance against Chinese colonial rule is alive inside Tibet.