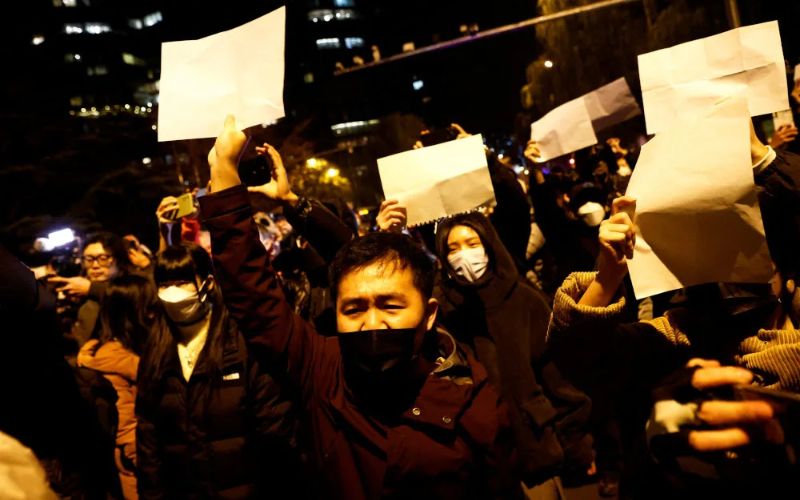 The China Foundation for Human Rights Development and the New China Research under Xinhua News Agency on Monday released a report on contemporary Chinese outlook on human rights, titled "For a Life of Contentment -- The Rationale for China's Human Rights Development." In what can only be termed as propaganda, the report overlooks the gross human rights violations committed by CCP in occupied Tibet, East Turkestan and Mongolia.

It is interesting that this report has been published in the backdrop of growing number of widespread protests in China against its inhumane Zero COVID policy and unscientific lockdowns. Chants of “Xi Jinping, step down”, “Communist party, step down” and “Unlock Xinjiang, unlock China” have been ringing loud and clear across the country and abroad, with demonstrators holding blank pieces of paper to protest against the tough COVID-19 policies, including mass testing, quarantines and snap lockdowns for the past three years. Referred to as the A4 Revolution/ Blank Paper Revolution, the protests saw people holding a blank paper to send the message of defiance against the authorities infamous for clamping down on any slightest form of dissent.

The report claims that “China's outlook on human rights has been continuously enriched and improved in practice, with its own cognitive perspective and ideological connotation based on the actual conditions of the country”. “China has followed a path of human rights development that conforms to the trend of the times and suits its national conditions in the practice of promoting human rights progress”, adds the report. When the entire world is questioning China on its human rights record, this seems to be an attempt to whitewash its abuses.

While ‘Uyghurs’ find no mention in the report, the term ‘Tibet’ features once in the 38 page long report. It mentions the story of an 80-year-old “Losang Droma from the Khesum Community in the city of Shannan, Tibet Autonomous Region, who has witnessed profound life changes”. “Before the abolition of serfdom in 1959, she worked in the slave owner's manor all year round without any income, and she was not treated as a person of dignity. Now, together with all Chinese people, she is living a moderately prosperous life”. This is a reiteration of CCP’s development propaganda – that Tibet was an undeveloped region, which CCP helped develop. This hides the fact that it was unlawfully invaded by China and its leader His Holiness the 14th Dalai Lama was forced into exile.

The Freedom in the World Report 2022 published by Freedom House had ranked China ‘Not Free’ and noted that China’s authoritarian regime has become increasingly repressive in recent years. “The ruling Chinese Communist Party (CCP) continues to tighten control over all aspects of life and governance, including the state bureaucracy, the media, online speech, religious practice, universities, businesses, and civil society associations, and it has undermined an earlier series of modest rule-of-law reforms”, observed the report.

Contrary to this, the new report by China claims that China conforms to the people's aspirations for a better life and attaches even greater importance to respecting and protecting human rights. Based on the human rights philosophy that centers on the people, China has proposed that "living a life of contentment is the ultimate human right," the report read.

It is ironical given that the country is rocked by protests led by its own discontented citizens.