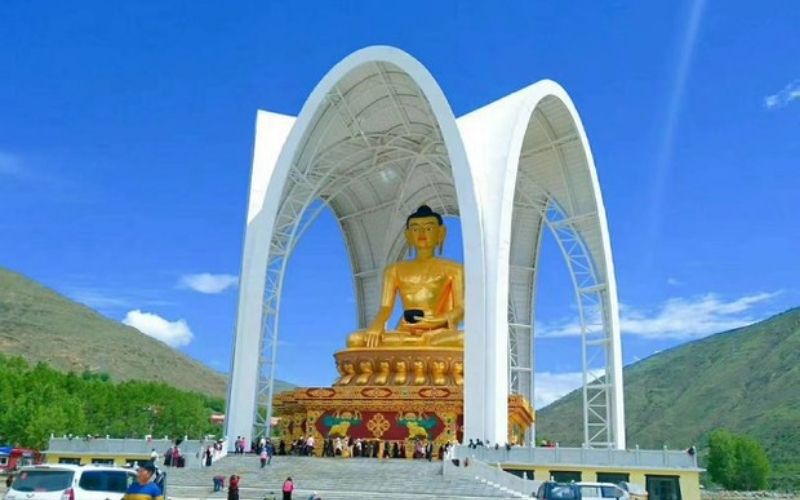 Lhasa: Authorities in western China’s Sichuan province are forcing Tibetan monks to take the blame for the destruction of sacred statues torn down by China, ordering them to sign affidavits claiming responsibility, RFA has learned.

Chinese government is accusing Tibetan monks in Drago County of destroying the Buddhist statues, and is coercing them into signing documents to take the blame,” a Tibetan living in exile said, citing contacts in the region.

“But due to tight restrictions in the area right now, it is difficult to gather information on what punishment the monks will receive if they refuse to sign these documents,” RFA’s source said, speaking on condition of anonymity to protect his contacts.

“Most of the local Tibetans and monks who were arrested for sharing news of the Buddha statues’ destruction have now been released, but they are constantly being harassed and are closely watched by the Chinese authorities,” the source added.

A 99-foot-tall Buddha statue that stood in Drago was targeted for demolition in December by officials who said it had been built too high. Monks from a local monastery and other Tibetan residents were forced to witness the destruction, an action experts called part of an ongoing campaign to eradicate Tibet's distinct national culture and religion.

Destroyed along with the statue were 45 traditional prayer wheels set up for use by Tibetan pilgrims and other worshippers, sources said. Drago county chief Wang Dongsheng, director of the demolition, had earlier overseen a campaign of destruction at Sichuan’s sprawling Larung Gar Buddhist Academy.