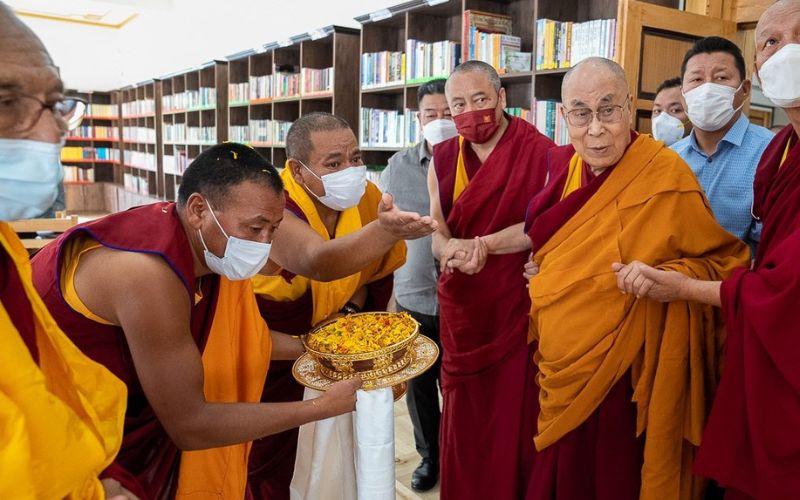 Quoting “Xizang experts”, Chinese media reports have claimed that the Chinese central government will “support and guide the work of finding the successor of the 14th Dalai Lama and the successor, like his predecessors, will be finally approved by the central government”. The media called it a “reaffirmation” after Sikyong Penpa Tsering, the President of the Tibetan government-in-exile observed that “China will definitely interfere with the succession process of the Dalai Lama”.

"For years, the Dalai Lama himself has been making lies to fool people who are not clear about history and the facts," Global Times quoted Zhu Weiqun, former head of the Ethnic and Religious Affairs Committee of the National Committee of the Chinese People's Political Consultative Conference as saying. The report went on to claim that the institution of the reincarnation of the Dalai Lama has been in existence for several hundred years and that the 14th Dalai Lama himself was found and recognized following religious rituals and historical conventions, and the succession was approved by the then central government, which shows that “the highest authority on the issue of the Dalai's succession does not belong to anyone, but is within the authority of the central government."

Continuing its usual rhetoric of hate against His Holiness the 14th Dalai Lama, the report argued that Dalai Lama “betrayed the motherland, trying in vain to turn the power belonging to the central government into his personal right, in order to achieve his separatist goals”. “He turned Tibetan Buddhism into a tool of separatism”, the report quoted Xiao Jie, deputy director at the Institute of Contemporary Studies of the China Tibetology Research Center as saying.

In an interview to PTI, Sikyong Penpa Tsering had pointed out that a replay of the appointment of a rival Panchen Lama by the Communist government of China in 1995, when the boy chosen by the Dalai Lama was whisked away from the public eye, can be expected as China has been preparing for the last 15 years to interfere in the succession of the Dalai Lama.

After the Communist Chinese invasion of 1950 and its subsequent takeover in 1959, Tibet has been a country under occupation. According to Tibetan Buddhism, the Dalai Lamas are manifestations of Avalokiteshvara or the Bodhisattva of Compassion. They have functioned as the political and spiritual leaders of Tibet since 1642. China’s Communist govt has often tried to interfere with the selection process of Dalai Lama; in 1995, the Chinese government caused the disappearance of the Dalai Lama’s choice for the successor of the Panchen Lama,when he was just 6 years old.

The government of the People’s Republic of China adopted the so-called law on ‘Management Measures for the Reincarnation of Living Buddhas in Tibetan Buddhism’, in 2007. Since then, the PRC has taken over the management of all monastic administrations and in particular, took complete control over the power to recognise reincarnated Lamas/Living Buddhas, and continue to use it to meet their political ends. According to CTA, the PRC government, in real-time, conducts workshops, discussion forums, talk shows and uses various means to promote a false narrative on the issue of reincarnation in general; and on the reincarnation of the present Dalai Lama in particular.

His Holiness the Dalai Lama has already declared that “the person who reincarnates has sole legitimate authority over where and how he or she takes rebirth and how that reincarnation is to be recognized” and that “it is particularly inappropriate for Chinese communists, who explicitly reject even the idea of past and future lives, let alone the concept of reincarnate Tulkus, to meddle in the system of reincarnation and especially the reincarnations of the Dalai Lamas and Panchen Lamas”.