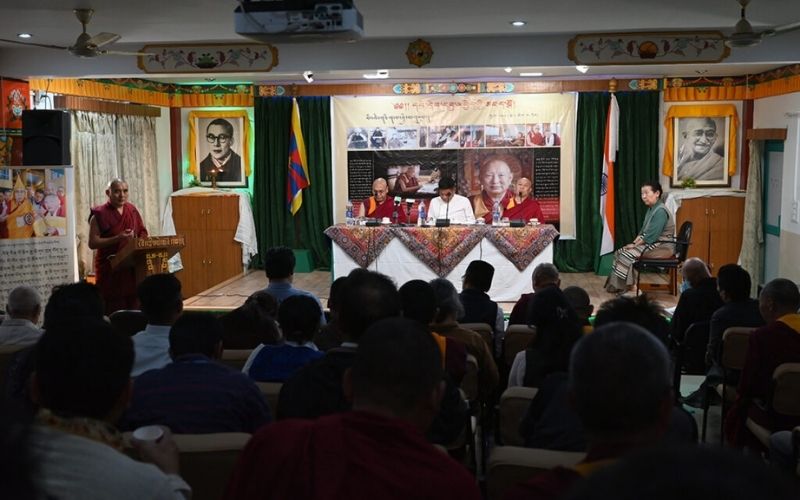 Dharamsala: Khenpo Sonam Tenphel, Speaker of the Tibetan Parliament-in-Exile, along with Sikyong Penpa Tsering of the Central Tibetan Administration, and Geshe Lhakdor, Director of the Library of Tibetan Works and Archives (LTWA) today launched the biography of Kyabje Kirti Rinpoche entitled ‘Three Lives in One Lifetime’ authored by Jianglin Li.

Lauding the author and all the others who have assisted in the production of the biography, the Speaker spoke on the legacy of Kyabje Kirti Rinpoche whose detailed life accounts depict the changes in the situation in Tibet from an independent Tibet to an occupied Tibet. Likewise, from witnessing the destruction of Tibet’s culture and artifacts under Chinese rule to fleeing into exile in India.

With remarkable contributions from His Holiness the Dalai Lama, Kyabke Kirti Rinpoche, and many others, the Speaker further spoke on the widespread of Tibetan Buddhism especially after coming into exile, and extended his heartfelt gratitude to all of them for preserving the Tibetan Buddhism so impeccably even in exile.

According to the reports, Khenpo Sonam also extended his gratitude to Kyabje Kirti Rinpoche for his lifelong contribution to the spiritual and political spheres of the Tibetan community in preserving Tibetan Buddhism, in the evolution of Tibetan democracy, and in providing much need social services in the Tibetan community.

The Speaker concluded his address by praying for the long life of Kyabje Kirti Rinpoche and thriving of his virtuous activity of deeds.

The book launch event was also attended by parliamentarians led by Deputy Speaker Dolma Tsering Teykhang of the Tibetan Parliament-in-Exile and many other dignitaries and scholars.