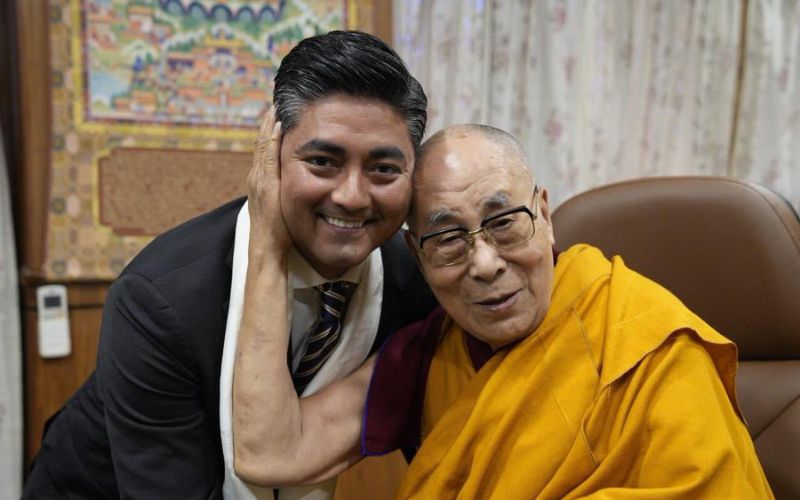 The first person of Tibetan heritage to hold a prominent elective office in the United States has visited Dharamshala and met with Tibet’s exiled spiritual leader, His Holiness the Dalai Lama.

According to a release from the office of the Cincinnati Mayor, Mayor Aftab (Karma Singh) Pureval was personally invited to India with a group of mayors to meet the Dalai Lama, according to the report.

“I am honored to take part in this incredible opportunity to meet His Holiness and invite him to our bold, dynamic city,” Pureval was quoted as saying in a statement.

As the highest-ranking elected Tibetan American in the nation, "my meeting with him showcases our city's commitment to diversity and growing the city equitably." "Having a global leader visit Cincinnati would be huge."

The report noted that the Dalai Lama had sent Pureval a letter full of prayers and well wishes for his mayor’s swearing-in ceremony, which took place on Jan 4, 2022.

Pureval, 40, is also the first Asian American to be elected mayor of Cincinnati, Ohio. His father is Punjabi-Indian, and his mother is Tibetan.

The Democratic 70th Mayor of Cincinnati previously served as the elective Clerk of Courts for Hamilton County, Cincinnati City's seat.

Pureval, a Juris Doctor from the University of Cincinnati College of Law, was the Democratic Party candidate for Ohio’s 1st congressional district, a Republican strong-hold but seen as flippable, for the 2018 election. He was one of 81 candidates endorsed by former President Barack Obama. He won 46.9% votes against the incumbent Republican representative’s 51.3%.

On January 14, 2021, he declared his candidacy for the Cincinnati mayoral election. On November 2, 2021 with 65.8% of the vote, he was elected as mayor making him the first Asian American to be elected as the mayor of Cincinnati.