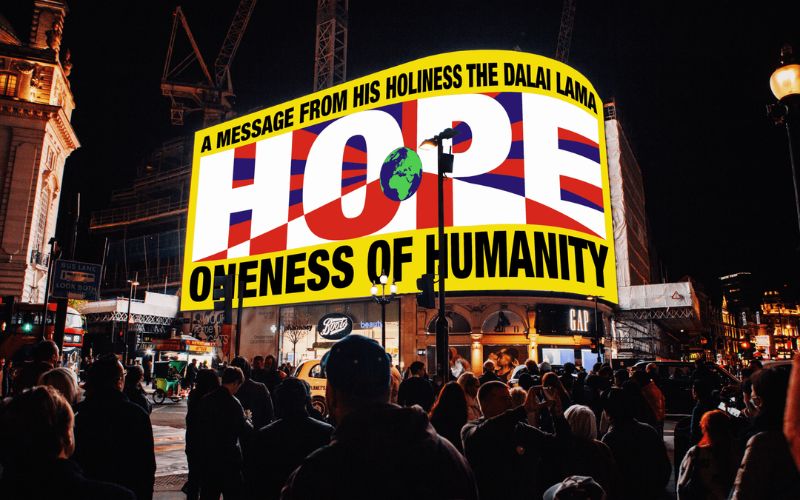 The Cultural Institute of Radical Contemporary Arts (CIRCA) will present a message of hope from His Holiness the 14th Dalai Lama. Launching Wednesday 11th January on London’s iconic Piccadilly Lights, The Art of Hope will broadcast daily throughout January at 20:23 local time across a global network of screens in London, Berlin, Melbourne, New York, Milan and Seoul.

His Holiness the Dalai Lama, one of the most influential figures of our time, calls on the world to consider hope and the oneness of humanity with this 3-minute animation created in collaboration with CIRCA.

The 87-year-old spiritual leader of Tibetan Buddhism was awarded the Nobel Peace Prize in 1989 and the U.S. Congressional Gold Medal in 2006. The four life commitments of His Holiness are promoting human values – kindness and compassion, religious harmony, preservation of Tibetan culture and environment, and revival of Ancient Indian Wisdom. Addressing the world in a video message recorded inside his office in Dharamshala, India, where His Holiness lives in exile.

His Holiness the Dalai Lama stated "I am trying to promote the idea of oneness of 7 billion human beings," in reference to the video.

The work was developed in collaboration with CIRCA in response to the digital art platform's 2023 manifesto, 'Hope: The Art of Reading What Is Not Yet Written'. It includes images of the Dalai Lama along with bold graphics in Prussian blue, scarlet, and gold.

His Holiness stated that "we must constantly consider the oneness of humanity, knowing that we all want to be happy." 'Along the way we may be faced with problems, but we must not lose hope. We must keep up our determination without being impatient to achieve quick results.'

“We are extremely grateful and honoured to launch the CIRCA 20:23 programme with His Holiness the 14th Dalai Lama. In 2023, hope will be the central mission of CIRCA. Recognizing its birth. Galvanizing its action. Offering hard-won hope. Whilst so many of our challenges are global and yet so much of our globe is deeply fragmented, this message of unity should give everyone reason for hope”, stated Josef O’Connor, Artistic Director, CIRCA.

The director of the Tibet Hope Centre, Damdul Topden, said, "We are very glad to cooperate in the promotion of His Holiness the Dalai Lama's message of hope in the hearts and minds of people all over the world." The Tibet Hope Centre will be able to continue its goal of bringing together Tibetans and people from other backgrounds thanks to the sales of this stunning #CIRCAECONOMY print, he stated.