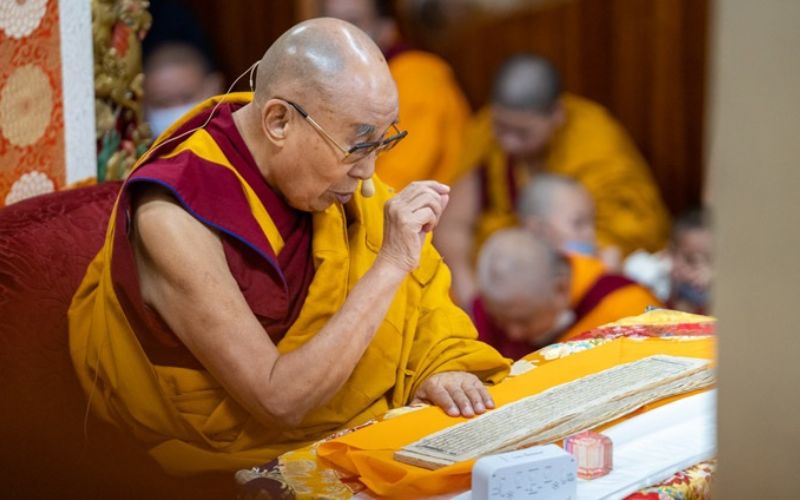 Dharamsala: Yesterday, His Holiness the Dalai Lama smiled and waved to members of the estimated 5000 strong crowd from 55 countries waiting to greet him. He seemed to pay particular attention to the elderly, stopping for a quick word, an affectionate pat on a head or hand, before moving on.

Once His Holiness was seated on the throne, the chant-master led a recitation of the ‘Heart Sutra’ in Chinese in which the 570 disciples from Taiwan joined in. Spotting a cat adrift in the congregation, His Holiness asked that it be returned to its owner in case it was distressed.

His Holiness announced, “our Chinese Dharma friends have asked me to teach Dharmakirti’s ‘Commentary on Valid Cognition’. “These days,” His Holiness continued, “people are absorbed in pursuing a materialistic way of life. While all religious traditions teach us to be kind, the Nalanda Tradition urges us to use our intelligence, to examine what disturbs our peace of mind. It is in this spirit that Dharmakirti reveals that after prolonged study of science and scripture, he is intent on composing this treatise, ‘Commentary on Valid Cognition’.

“Some scholars in the past in Tibet criticized this book as being of little interest to those who seek liberation because it does not deal with the stages and paths. Jé Tsongkhapa refers to this in his verse account of his own study and practice, ‘Destiny Fulfilled’.

His Holiness emphasized that “It is important to study the Commentary on Valid Cognition because it uses reason and logic to show that the Buddha is a reliable guide. Therefore, Jé Rinpoché studied it.”

His Holiness remarked that we live in a scientific era and that scientists are showing increasing interest in what the Buddha taught about the workings of the mind and emotions and how related insights help us achieve peace of mind. He pointed out that the principal factor contributing to such inner peace is training in altruism—love and compassion. He noted that when you have peace of mind, you sleep well without recourse to sleeping pills.