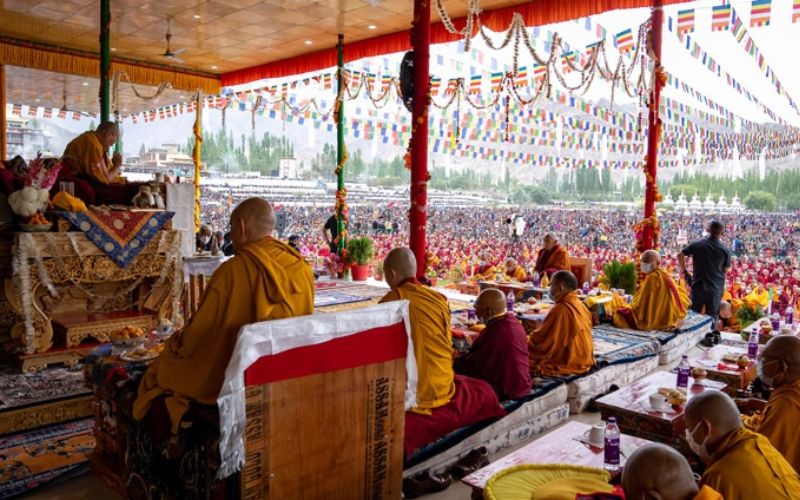 His Holiness the Dalai Lama concluded three-day teaching in Ladakh

Ladakh: The exiled Tibetan leader His Holiness the Dalai Lama concluded a three-day teaching in the upper reaches of the Himalayas in Ladakh on Saturday. Tens of thousands of followers from across the sparsely populated region attended the religious event at the Shewatsel ground as the foremost Buddhist figure gave teachings on Shantideva’s ‘Way of a Bodhisattva’.

The octogenarian leader on Thursday told the devotees that “happiness will stem from warm-heartedness” and that at times “your so-called enemy can be your best teacher”, citing Chinese communists as an example. “Although Tibetans have faced great hardship and misery at the hands of Chinese Communists, I advise them not to harbour feelings of hatred or vindictiveness,” he told the crowd on the first day, adding that the retaliation will not help in leading happy lives.

“Keeping our Buddhist cultural heritage alive in the Himalayan regions will naturally benefit the Tibetan people. Our struggle for freedom and dignity is based on truth and justice and will be best achieved by relying on ‘ahimsa’ [non-violence],” he further remarked.

The Nobel laureate also talked about the close relation between Ladakhi and Tibetan empires, emphasizing on the importance of Ladakh people in preserving their cultural heritage through the study of Buddhist texts. “The people of Ladakh and Tibet have had a very close relations from ancient times. If people in the Himalayan region, from Ladakh to Arunachal Pradesh, are able to preserve their Buddhist cultural heritage, they will make a great contribution for Buddhism to flourish in the world.”

The three-day teaching in Ladakh marks His Holiness’ first visit to the region since 2019. Earlier this year, a Ladakhi delegation visited the Tibetan leader at his residence in Dharamshala and extended invitation to visit Ladakh.