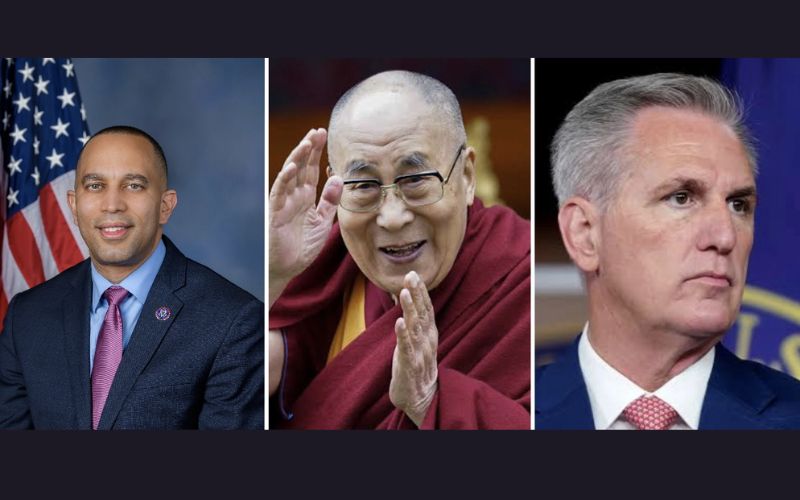 His Holiness the Dalai Lama, in his separate letter congratulated the Honourable Kevin McCarthy, Speaker of the United States House of Representatives, and the Honourable Hakeem Jeffries, House Democratic Leader, on their recent election victories.

"I have long admired the United States for its role in upholding fundamental values like democracy and the rule of law," His Holiness stated. "As a major power in the free world, the United States can make a unique contribution to shaping a more peaceful world by addressing economic challenges, social issues, and climate change. The United States provides liberty and opportunity to all of its citizens. This is what has turned it into a beacon of hope.

"Since 1979, I have had the pleasure of visiting the United States many times and have had the opportunity to share my thoughts on a broad range of issues with the leadership, including some of your predecessors as Speaker. I've also been able to express my concern for the Tibetan people in Tibet, who look to me with hope and trust. The Tibetan people are grateful to the United States for its broad-based bipartisan support. Our struggle is about ensuring that our people can live with dignity while preserving and promoting our ancient culture – a culture of peace, nonviolence, and compassion – which has the potential to benefit humanity as a whole.

"I believe the situation in China is evolving, and I am hopeful that this will lead to positive change," His Holiness added. At the same time, I am pleased to inform you that the Tibetan people's determination and spirit in Tibet remain unbreakable.

"In my personal life, I am dedicated to promoting human values, encouraging inter-religious harmony, working to preserve Tibetan Buddhist culture, protecting Tibet's fragile natural environment, and raising awareness of and interest in the ancient Indian understanding of the workings of the mind and emotions."

His Holiness concluded by wishing both leaders "every success in your efforts to realise the hopes and dreams of the American people and to contribute to a happier, more peaceful world."