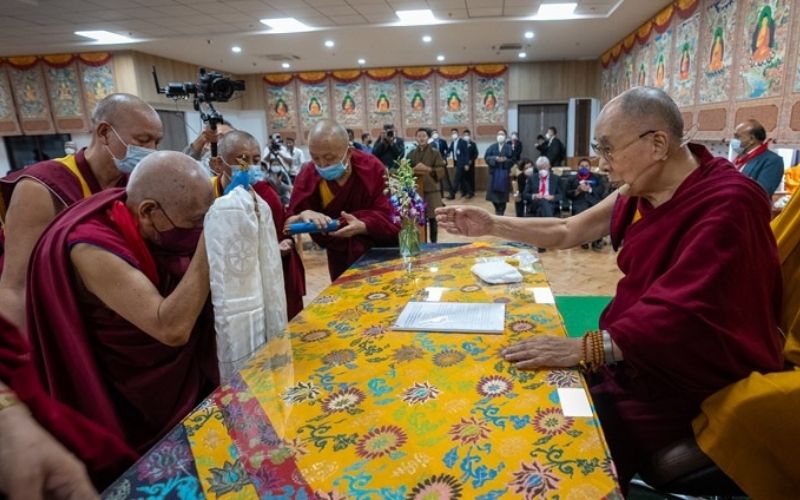 Dharamshala: Tibetan spiritual leader His Holiness the Dalai Lama marked his 87th birthday on Wednesday by inaugurating a library and museum in Dharamshala. He attended a ceremony to inaugurate the Dalai Lama Library & Archives in a new building below his residence but above the Lha-gyal-ri circumambulatory path. He was cheered by a large number of followers, including American actor Richard Gere, a longtime disciple.

Hundreds of schoolchildren, monks and local residents prayed for the Dalai Lama’s health and life at Tsuglakhang Temple near his residence. The Dalai Lama Library and Museum contain artifacts, his teachings, and books on his life and struggle for Tibetan autonomy and protection of its native Buddhist culture. His Holiness presented the architect, engineers, site supervisor and others who were actively involved in the construction of the Library and Archive building with a symbol of gratitude and certificate of appreciation.

“The objective of this Library is to preserve His Holiness’s teachings so that people can have access to them. Teachings of previous Dalai Lamas will also be archived. The various awards presented to His Holiness will be collected here and put on display. Altogether the intention behind this project is assemble resources for those who wish to research His Holiness’s life and work. We have been able bring it this far due to the kind support of His Holiness the Dalai Lama”, said Ven Samdhong Rinpoché to the gathering.

Rinpoche added “In the past, people memorized the teachings and could recite them by heart. However, now in this technologically more developed age, we can preserve His Holiness’s teachings in a digital format. Some records may be incomplete, but we will endeavour to restore them. There are also many books by and about His Holiness in languages other than Tibetan and English which we intend to archive.”

“In addition to gathering resources together, we also plan to convene seminars and meetings with people who have a special connection with His Holiness. We have good equipment and well-trained staff to operate it to link up with other people around the world”.

Rinpoche concluded by pointing out that construction of this archive building, as well as accommodation for staff of His Holiness’s Office, began in 2017, was interrupted by the Covid-19 pandemic, and resumed in 2020. He prayed that whatever merit had been created be dedicated to His Holiness’s long life.