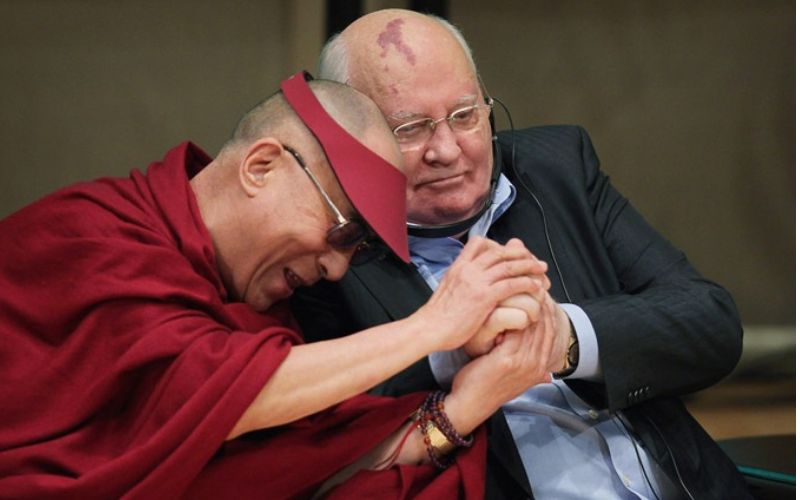 'Mikhail Gorbachev was a man of vision and an exemplary statesman': HH Dalai Lama

Dharamshala: After learning this morning that Mikhail Gorbachev, former leader of the Soviet Union and Nobel Peace Laureate had passed away, His Holiness the Dalai Lama wrote to the Gorbachev Foundation to express his sadness.

“I make heartfelt prayers for my friend and offer condolences to his daughter, Irina Virganskaya and members of his family, his friends and supporters,” he wrote.

“I had enormous respect for him and his efforts to introduce greater openness and transformation, as well as for his opposition to nuclear war. He worked actively to reduce the number of nuclear weapons in the world.

“Over the years I had the great honor to meet him on many occasions when we both took part in peace forums in different parts of the world. We have remained in close contact.

“Mikhail Gorbachev was a man of vision and an exemplary statesman. Even after his retirement he continued to be committed to promoting peace and reconciliation in the world. His initiation of the World Summit of Nobel Peace Laureates has allowed Nobel Peace Laureates and their respective organizations to come together regularly to apply their collective thoughts to bringing about a more caring, peaceful world.

“He lived a meaningful life,” His Holiness concluded. “We should continue to keep his spirit alive by emulating the enthusiasm and determination with which he encouraged freedom and worked to create a demilitarized world.”