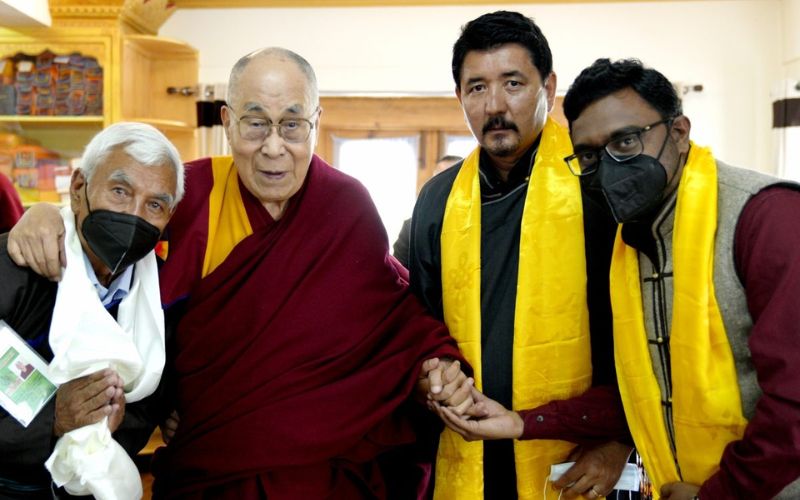 Ladakh: According to report by The Statesman, having completed his weeklong isolation, Tibetan spiritual and temporal leader Dalai Lama has appreciated the introduction of social, emotional and ethical (SEE) learning in the schools in Ladakh. He arrived in Leh on 15 July and is expected to stay for a month.

The Dalai Lama praised the Ladakh Administration, CEC, MP Ladakh, and DC Leh for their efforts towards the collective development of all sectors in the region. He thanked the administrative officers along with officials of LBA and LGA for the arrangements during his visit.

Gyalson informed about various developmental activities undertaken by the people of Ladakh post formation of Ladakh as a Union Territory. He further apprised the Lama about the commitment of the Administration and the Hill Council, Leh to equal and parallel development of all the Tibetans residing in Ladakh in line with the local citizens.

He added that in recent times, Tibetans have equally benefited from various developmental projects and basic essential supplies that include electrification, road connectivity, water facilities, and many more to count on.

Gyalson requested the Dalai Lama to have a separate interactive session with the Councillors of LAHDC Leh, BDC Chairpersons, Sarpanches, and District Officers. He also requested him to stay in Leh for a longer period till the end of this summer for which the Ladakh Administration and LAHDC Leh would take utmost care of the logistical arrangements and the hospitality.

Information Supplied by The Statesman