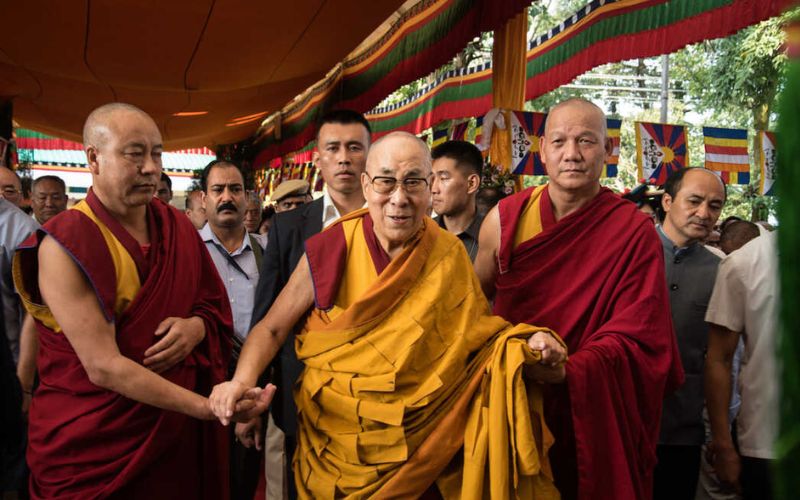 His Holiness The Dalai Lama’s Teaching on Avalokiteshvara Jinasagara Empowerment

Dharamshala: Some 8500 people from 56 countries, including 700 monks, nuns and laypeople attended religious teachings and empowerment given by His Holiness the Dalai Lama over Jun 13-14. Jun 14 coincided with the Tibetan Buddhists’ most important festival of Saka Dawa, the full moon day of the fourth Tibetan month marking the birth, enlightenment and passing away of the Buddha Shakyamuni some 2,600 years ago.

The teaching on ‘Concise Stages for the Path to Enlightenment’ and the Empowerment of Avalokiteshvara Jinasagara were requested by Tai Situ Rinpoche, whom an exuberant Dalai Lama described as a long-time friend. Rinpoche made him a mandala offering of the three representations of the body, speech and mind of enlightenment.

During the course of the teaching, the Dalai Lama said, “The teaching of the Buddha doesn’t just depend on faith, it’s based on reason. What the Buddha said can be put to the test of reason. Later, the masters of Nalanda, such as Nagarjuna, showed how important it is to examine the Buddha’s teaching in the light of reason and establish that he was an incomparable teacher.”

The Dalai Lama also said his decision to leave Tibet when it was occupied by China turned out to be correct. He said that if he had remained in Tibet, he wouldn’t have been able to deepen and extend his understanding of the world. In exile he met all kinds of people from all walks of life and learned from them, he said. Moreover, technological innovations, such as the internet and mobile phones, had meant that he could exchange views with people everywhere, he added.