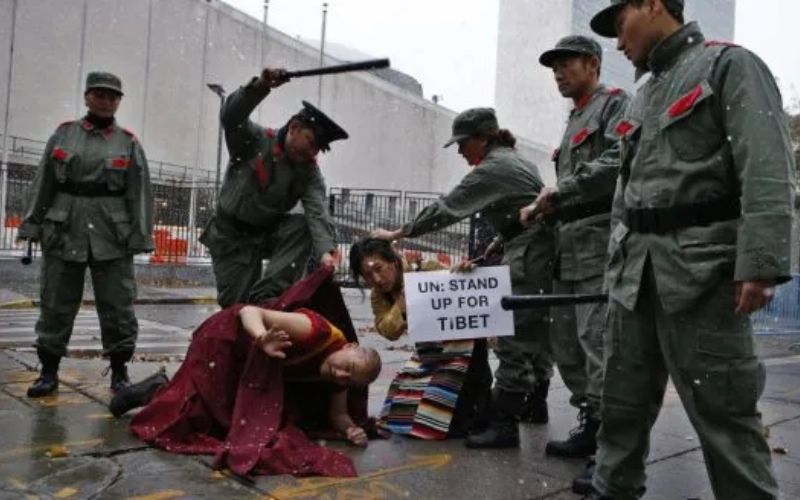 Human Rights Watch highlighted Tibet in their annual report 2023 on human rights around the world. Chinese authorities in Tibetan areas continue to enforce severe restrictions on freedoms of religion, expression, movement, and assembly, observed the report.

“Popular concerns over issues such as mass relocation, environmental degradation, or the phasing out of the Tibetan language in primary education were met with repression. Local officials are required to educate the public in “obeying the law,” and cash rewards are offered to citizens prepared to inform on others”, stated the report.

Furthermore, the report noted that “Under intense censorship, Tibetans continue to be detained for online offenses, such as having banned content on their phones or “spreading rumors.” Authorities introduced a ban on posting religious teaching and other content online, intended to enforce tight official control over religious institutions and teachers. In a Tibetan area of Sichuan province, regional authorities ordered the demolition of outdoor statues and temples, the construction of which had initially been approved”.

There have been reports of the arrest and sentencing of Tibetan religious and cultural figures suspected of dissent, as well as their mistreatment in detention, particularly the writers Go Sherab Gyatso, Rongwo Gendun Lhundrup, and Tubten Lodro (alias Sabuchey). Tsewang Norbu, a popular young pop singer, staged the first self-immolation protest in front of the Potala Palace in March, becoming the first Tibetan from an urban background to do so.

2022 was a year when Tibetan where subjected to a number of Human rights violations under CCP. China’s mismanagement of Covid in Tibet revealed the “extreme human costs when authoritarian police states prioritize censorship and social control over the wellbeing of the people", stated International Campaign for Tibet.

Around late September 2022, at least five people took their lives by jumping off buildings in Tibet's capital Lhasa and its surrounding suburbs. Such suicides were seen as a form of protest against the psychological impact of the mass-mandated quarantine sites and what they refer to as "China's inhumane Covid restrictions". The extreme censorship and personal tracking of all people (irrespective of them testing positive and negative) were added reasons.

Another incident is that of the death of a three-year-old in the north western city of Lanzhou. While the boy died of an apparent carbon monoxide leak, his father has been claiming on Weibo (Chinese equivalent of Twitter) that his child could have been saved if the Covid workers would have allowed him to leave his compound to get medical assistance.

It is indeed shocking to note that the report does not mention the mass DNA collection, the case of colonial boarding schools in Tibet, the struggles Tibetan faced as a result of CCP's unscientific zero covid policy & Tibet's climate crisis.