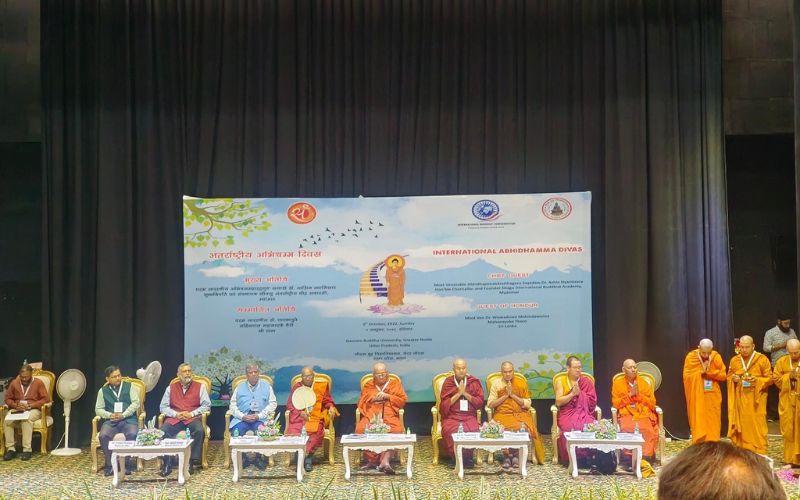 The event began with the lighting of the lamp and offering of flowers to the Buddha statue by the Chief Guest and other dignitaries. A high-level delegation across Buddhist countries actively participated at the International Abhidhamma Day organized by IBU in collaboration with Ministry of Culture and GBU.

Dr Ashin Nanissara (Sitagu Sayadaw), Chancellor, Sitagu International Buddhist Academies, Myanmar was the Chief Guest at the event. "I am very happy to share my knowledge this morning on how to study the Abhidhamma. Abhidhamma is the most important thing in any religion because if someone studies the Abhidhamma, he/she will understand what I am, where I am, what I have to do. He or she will have to understand," the chief guest said today.

Dr Dhammapiya, Secretary General, the International Buddhist Confederation said: "Our Prime Minister of India Narendra Modi used to emphasize on various occasions the teaching of the Buddha and the message of peace and harmony. He used to say that India has given to the world a message of peace, the Buddha, the symbol of global peace and the teachings of the Buddha is a message for unity and harmony." During the event, Buddhist monks presented Dhammasangani Matika Path which created a spiritual atmosphere all around.

A book titled 'Recent Development in the Studies of Abhidhamma in India', was also launched during the event. Eminent monks from Sri Lanka, Myanmar, Nepal, Bhutan, ambassadors based in India and other diplomats representing various countries also took part in the Abhidhamma Divas celebrations at GBU, NOIDA.

Last year, the Abhidhamma Divas was organized at Kushinagar at Mahaparinirvana Temple, where the Hon'ble Prime Minister of India was the Chief Guest. He also inaugurated the international airport at the Buddhist pilgrimage town. This is the third Flagship program of the IBC; the other two being Buddha Purnima and the Asadha Purnima.