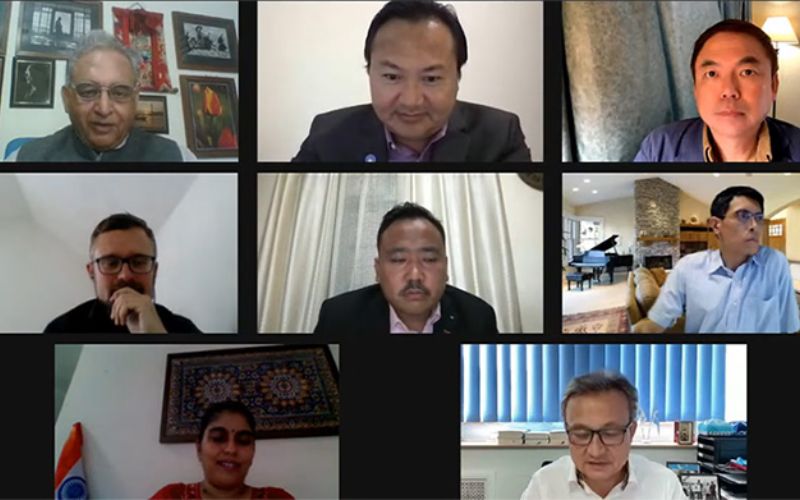 New Delhi- Leaders of China's largest colonies, including Tibet, East Turkistan (Xinjiang), Southern Mongolia, and Hong Kong, as well as experts from Taiwan, the Chinese democracy movement, and the European Parliament, have expressed the belief that only through strong cooperation between these colonies can the communist regime fall and, with it, their freedom.

On the late evening of Saturday, August 13, 2022, these leaders and experts came together on a unique common platform sponsored by the Tibetan Youth Congress (TYC) and the Centre for Himalayan Asia Studies and Engagement (CHASE) to discuss the question of "WILL CHINA'S COLONIES CELEBRATE INDEPENDENCE DAY SOON?" Vijay Kranti, a seasoned journalist, Tibetologist, and Chairman of CHASE, moderated the webinar.

Makulas Peksa, a well-known Czech member of the European Parliament and the head of its "Tibet Interest Group," gave the opening speech. He recounted instances of numerous colonial powers in Europe throughout the course of previous centuries and how, as a result of their immoral interactions with their colonies and the ensuing resistance of their citizens, they eventually fell. "Today, just two former colonial powers remain: China and Russia. It might not last more than ten years because to the ongoing conflict in Ukraine and severe corruption in Russia. But given that China is the largest empire of our time, with abundant industrial resources and a large labour force, its situation appears to be a little more problematic, he added.

He made reference to China's efforts to meddle in the democratic processes of other nations, including his own, by influencing certain political leaders through corrupt tactics and occupying crucial corporations. "However, pushback has already begun. We may not be in a position to predict the collapse of the Chinese empire at this time, but we are now in a phase where the Chinese empire is becoming more isolated and is being resisted by those who are forming international alliances against China because they are bound by their fear of Chinese aggression. It's the beginning of the end, in my opinion. The events in Tibet, East Turkistan, Southern Mongolia, often known as Manchuria, and Hong Kong are now becoming more widely known. Other nations may experience the same, so it must be avoided. I believe that the current Chinese colonies' freedom is the best way to bring peace to the rest of the globe," he remarked.