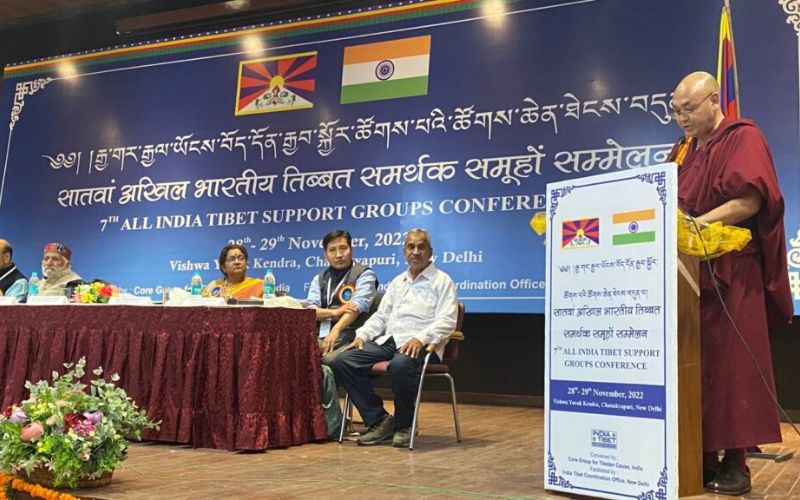 Delhi: The Pan India Tibet Support Groups conference in Delhi, which lasted two days, came to a close yesterday with the adoption of numerous notable declarations in accordance with the Tibet Policy and Support Act 2019 that the US Congress passed. The declarations that were made serve as a road map for getting the Indian government to have clear policies about Tibet.

The representatives have made a number of important demands, one of which is for the Indian government to acknowledge the Central Tibetan Administration as the legitimate global representative of Tibetans and to fully support the CTA's Middle Way Approach in resolving the ongoing Sino-Tibet conflict.

The delegates also petitioned to denounce China's involvement in the reincarnation of Tibetan tulkus and demanded more political involvement or support to defend the Tibetan people's national identity.

Speaker Khenpo Sonam Tenphel of the Tibetan Parliament in Exile, Dr. Neerja Madhav, a well-known author and friend of Tibet, Dr. K.C. Agnihotri, a former Vice Chancellor of Himachal Pradesh Central University, and Secretary Karma Choeying of DIIR are among the keynote speakers at the conference's concluding session.

The Speaker of the Tibetan Parliament lauded the Core Group for Tibetan Cause’s leadership in ensuring the Tibetan movement’s sustenance. He acknowledged in gratitude India’s considerable support to Tibetans for the last 60-plus years, adding, “India is the only country who held our hand when we needed it the most; therefore, we are indebted to the Indian government and its people,”.

Even though numerous governments and policymakers around the world continue to support the Tibetan cause, many people still consider Tibet to be China's internal affairs. Accepting China's claim to Tibet as legitimate would violate international human rights law, the Speaker warned.

He further cautioned India about China's ability to extend its authoritarian regime beyond Tibet, which China has repeatedly demonstrated through military confrontations and incursions at the Indo-Tibet border. He made the point that India's ongoing border conflict with China will not be stopped as long as the Tibetan issue remains unresolved. Read the declaration here.