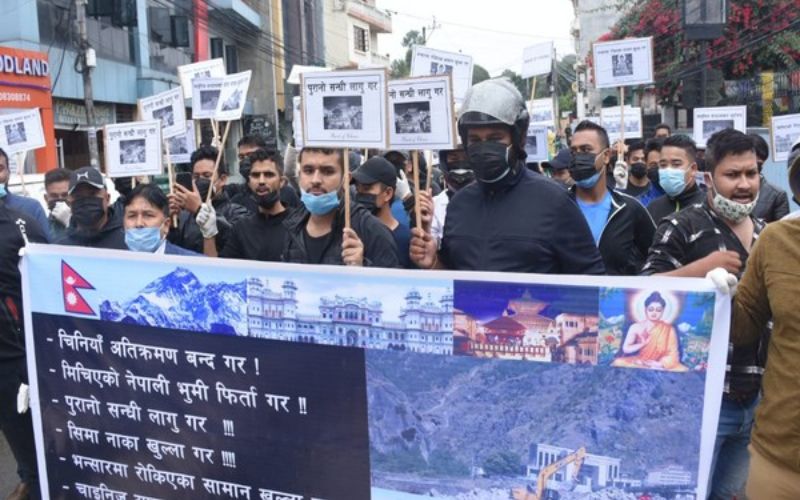 Kathmandu: According to reports, China is encroaching on Nepal’s territory and the country’s civic group Rastriya Ekata Abhiyan has held a protest rally this week, demanding that the former remove a wire-fence it had unilaterally laid within the no-man’s land in Gorkha District and its encroachment into the northern part of the country.

The protesters were stated to have chanted anti-China slogans demanding return of the encroached lands. “Go back China”, “Put an end to Chinese expansionism”, “Return encroached land”, “Halt Chinese intervention” and “End the undeclared blockade against Nepal” were stated to be some of the slogans chanted by dozens of protesters as they marched towards the parliament in Kathmandu.

“China is violating the agreement that was sealed between the two nations. China has always been going against the agreement by building 12 buildings in Humla District in Nepali territory,” Rashtriya Ekata Abhiyan chairperson Vinay Yadav was quoted as saying.

He has said these transgressions by the Chinese government were repetitive. The report noted that while the local Nepalis had been complaining that the Chinese were putting up a fence at the Ruila border within the no-man’s land, the Gorkha Chief District Officer Shankar Hari Acharya expressed ignorance about it.

The fencing, which took place over the past couple of weeks and measured 150 meters-long, was stated to have stopped the movement of locals across the border. It has been pointed out that international norms say no structure or fences can be built in no-man’s land and any such action requires bilateral consensus.