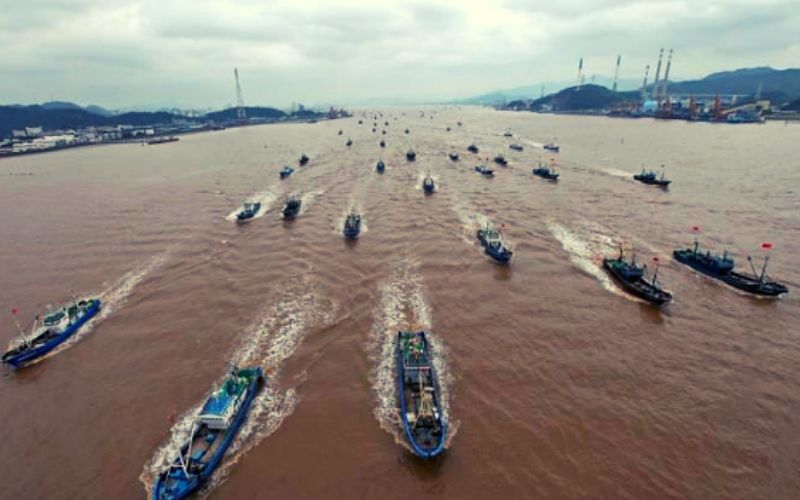 China has been involved in illegal fishing in Exclusive Economic Zones (EEZ) of over 80 countries with over 10 million hrs of fishing from 2019 to 2021, a new report by Investigative Journalism Reportika has shown.  Chinese ships disable their transponders close to EEZ of other countries to avoid being detected by the AIS system; a practice called "marine radar evasion".

The Chinese Distant Water Fishing Fleet (DWF) is present in every ocean. It is frequently found to be in violation of domestic laws as well as the United Nations Convention on the Law of the Sea (UNCLOS). It also targets endangered species, falsifies licenses and documentation, engages in espionage and reconnaissance activities, seizes territories, generates a lot of sea waste, and violates other nations' EEZs.

China is the world's largest aquaculture and fisheries producer. According to the United Nations, China consumes approximately 36% of total global fish production and harvests 15.2 million tonnes of marine life annually, accounting for a massive 20% of global catch. According to the Food and Agriculture Organization (FAO), China will be among the top ten global capture producers from marine sources in 2020.

After depleting fish stocks in domestic waters, including the South China Sea, Chinese fleets are now venturing further afield to meet rising seafood demand. Beijing claims to have 2,500 ships in its distant water fishing fleet, but multiple studies claim that there are more than 18,000 boats in the world's oceans.

China has been ranked first in several parameters of illegal, unreported, and unregulated (IUU) fishing. According to the IUU rankings report 2021, more than 60% of its vessels are involved in IUU fishing around the world.

While illegal fishing, captains of Chinese DWF ships disable their transponders to avoid being watched in sensitive areas. The automatic identification systems (AIS) aboard these ships have been observed to experience transmission pauses of at least eight hours near other countries' EEZs.

Oceanian countries are concerned about Chinese fishing activities off the coast of the South China Sea, which have increased proportionally to the PRC's investments in infrastructure such as ports and airports. Papua New Guinea, New Zealand, the Solomon Islands, Vanuatu, Tonga, Fiji, the Cook Islands, and Samoa joined the Belt and Road Initiative between 2018 and 2019. (BRI). Palau intercepted and detained Chinese DWF boats fishing for sea cucumber illegally in its territorial waters in 2020.

Investigative Journalism Reportika’s mission is to expose government, business, and other institutions' abuses of power and betrayals of the public's trust while utilizing the moral force of investigative journalism to encourage reform by persistently bringing attention to wrongdoing.