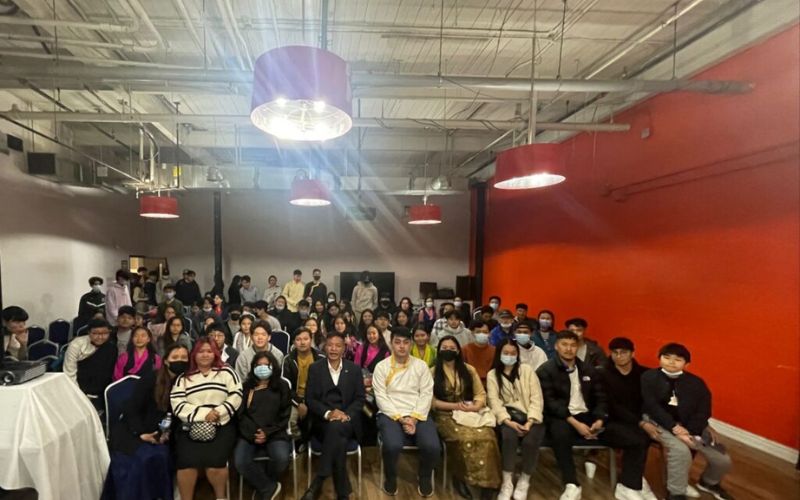 Dharamshala: On the 8th of May, Sikyong Penpa Tsering of the Central Tibetan Administration addressed Tibetan youngsters at the Tibetan Canadian Cultural Center in Toronto. During the discussion, Representative Namgyal Choedup accompanied Sikyong.

Sikyong offered a brief review of Tibetan history, the historical ties between India and Tibet, and the origins of words like "top of the globe," "third pole," and "fountain of Asia," which are frequently used to characterise Tibet, in his talk.

Sikyong stated that the Kashag will be pressing forward with the Voluntary Tibet Advocacy Group (V-Tag) campaign as rigorously as possible starting in April this year. "As the Representative mentioned, His Holiness always says that whether we like it or not, we are born as Tibetans in flesh, blood, and bones in this life." As a result, we bear this obligation. I am a Tibetan born in exile in India who has never visited Tibet. I travel around the border areas to fulfil my longing to see Tibet, and I can see Tibet through the barriers," he explained.

"Last year, I visited all of the nomadic villages in Ladakh, and I saw Tibet across the Indus." I had already visited Tibet via the Nathu La crossing in Sikkim and Bumla in Arunachal Pradesh. We used to gather around the elders as kids and listen to stories of how our Amdo forefathers came to Lhasa and how long it took them to get there," he recounted.

Sikyong also discussed the importance of maps in maintaining our perceptions of Tibet. "It is critical to examine the Tibetan map. Because we have never seen Tibet, we can only imagine it through maps. So I recommend that you look at the Tibetan map, and that the Tibetan community provide a large map of Tibet here. You can get an idea of the distance and how long it took your parents and grandparents to journey to Lhasa by glancing at the maps. This will help shape your thoughts and make you more accountable for your country," he said.

Sikyong spoke about the Shangshung empire, which dates back to Tibet's first king Nyatri Tsenpo, the vast Tibetan empire that arose in the 9th century and captured the Chinese capital of Xian at one point, the disintegration of the Tibetan empire, and the origins of Tibetan script and Tibetan Buddhism from India.

Sikyong also spoke on early visitors to Tibet and how their writings shaped how the rest of the world views Tibet. He talked on how Chinese history dominates western studies of Asian history and how Tibetans, Mongolians, and other Asians have unique viewpoints on history that differ from Chinese history.

After Sikyong's speech, Dukthen Kyi, Head of the Tibet Advocacy Section at the Department of Information and International Relations, spoke about the Kashag's VTAG initiative and encouraged Tibetan youth to enrol. It was followed by a quick round of questions and answers.