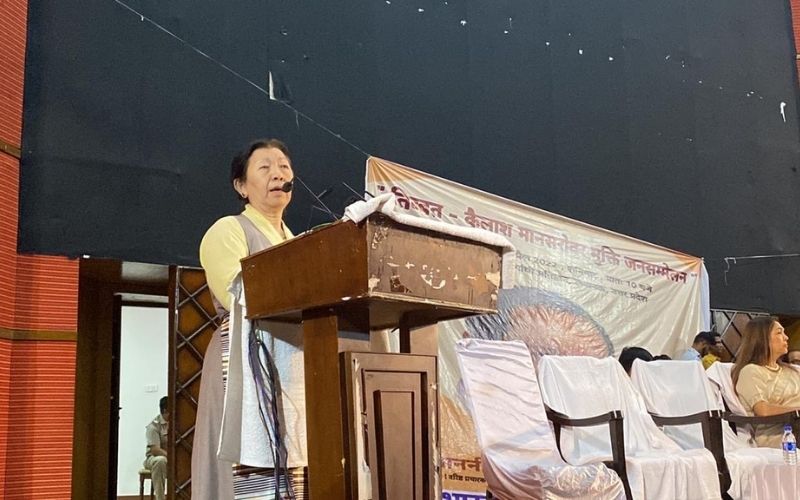 Bharat Tibbat Sahyog Manch is one of the many Tibet Support groups in India that was founded under the patronage of Shri Indresh Kumar ji and Dr. Kuldeep Chand Agnihotri with the blessings of His Holiness the 14th Dalai Lama and former Sarsangh Chalak of Rashtriya Swayamsevak Sangh (RSS) late Shri Sudarshan ji on 5 May 1999. More than 200 members of BTSM from 29 states of India participated in the convention.

In the welcome speech, Mr. Pankaj mentioned that the core aim of the BTSM is to create awareness about Tibet’s issue and incursion by the Chinese forces at the Indian border to the Indian audience at large to liberate Tibet and Kailash Mansarovar.

The Deputy speaker opened her address recalling the words of the father of Indian constitution Dr. Bhimrao Ambedkar in 1954 Rajya Sabha. “Instead of according recognition to China in 1949, had India accorded this recognition to Tibet, there would have been no Sino-Indian border conflict” which is one truth of the history and the other truth is that Tibet was never part of China and India and China shared no border till PRC invaded Tibet illegally. She stated “unless the issue of Tibet is resolved, the border conflict between India and China will remain unsolved”.

Liberation of Kailash Mansarovar is possible only after the Tibet issue is solved for which early resumption of dialogue between the representatives of His Holiness the Dalai Lama and Chinese counterpart is prime important. She talked in length on the critical human rights situation, political repression, religious and cultural assimilation, population transfer and racial discrimination inside Tibet.

She also challenged the Chinese leadership to answer why Tibetan brothers and sisters are burning themselves if they are basking in the sunshine of Socialism. She applauded the programs and campaigns conducted by BTSM and simultaneously urged the BTSM to work closely with Tibetan stakeholders to raise more awareness on Tibet and its appalling situation among the grassroots Indians. In the end she expressed her gratitude to BTSM for organizing this event.