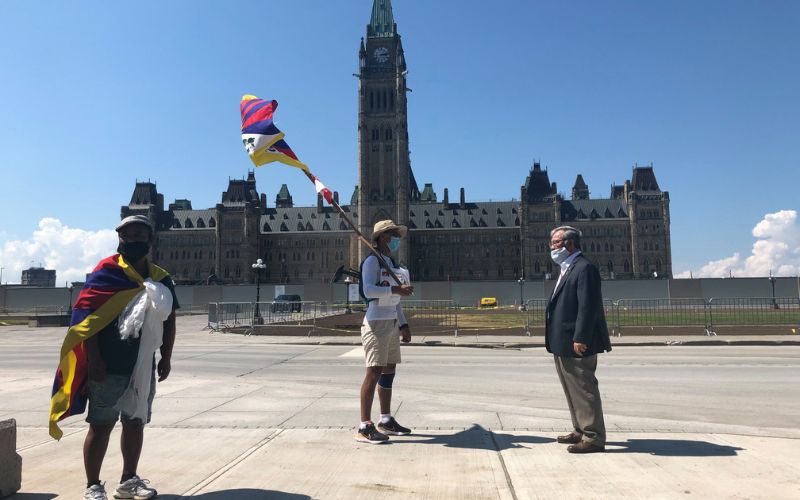 Sangyal Kyab to embark on third Peace Walk for Tibet

Ottawa: Tibetan human rights activist Sangyal Kyab is set to embark on his third Peace Walk from the Chinese Consulate in Toronto to Chinese Embassy in capital Ottawa, and back to Toronto, Canada on 11th June 2022, 10 a.m. to raise awareness of his cause and seek the support of Canadian politicians. Free T-shirts and brochures will also be distributed to create awareness about Tibet.

While still a teenager, Kyab had left Tibet in 2004, heading first to Nepal, then India and, in 2014, Canada. Toronto-based Sangyal Kyab has been protesting outside Chinese embassy every Wednesday since Jan 2018.  Started as a solo campaign, and now being joined by couple of Tibetans in Canada whenever they can, Sangyal goes LIVE on Facebook every Wednesday in front of Chinese embassy.

He has put forth five demands to the international community and Canada to support Tibet: (1) to support the return of His Holiness the Dalai Lama to Tibet, (2) renew Sino-Tibetan dialogue in good faith, (3) to release Panchen Lama and other political prisoners in Tibet, (4) to support human rights in Tibet because living under immense repression, more than 170 Tibetans have self-immolated since 2009, and (5) China stops reckless development policies are devastating Tibet’s environment, putting the whole planet at risk.

His demands are based on the core issues of the Tibetan movement. Tibetan spiritual leader His Holiness the 14th Dalai Lama, hasn’t been to his homeland Tibet since coming to exile in 1959. China, in recent years, has started claiming the right to appoint the next Dalai Lama despite facing strong criticisms from the international community for their interferences in Tibetan Buddhist traditions.

In the last decade, 159 Tibetans have resorted to setting themselves on fire to protest against the Chinese rule and the systemic violation of Tibetan human rights, including the right to self-expression. The self-immolation protesters include nuns and monks, but many were ordinary laypeople: nomads, peasants, students, teachers, vendors, a carpenter, a woodworker, a writer, a painter, a taxi driver, a retired government cadre and a laundry owner. Although these protesters came from different walks of life, they were all unified in their final exhortations as Tibetans in Chinese-occupied Tibet.