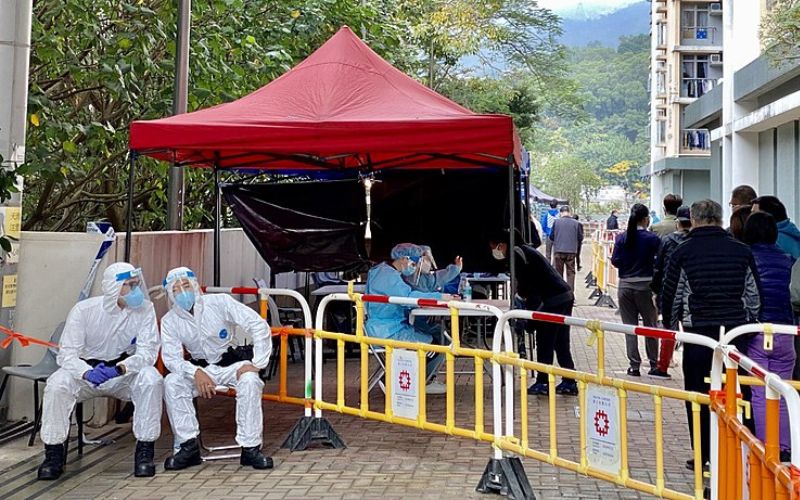 Tibetans in the region are taking to social media to reveal the harsh conditions they are subjected to under the name of Chinese Communist Party’s infamous Zero-COVID policy. Videos that show Tibetans talking about poor quarantine facilities with no sanitation/ beds and no caretakers, harsh quarantine rules, crowded testing sites with no distancing rules followed, unavailability of food and medicines, barely edible food, no potable water and unplanned lockdowns leaving many helpless are being shared in social media, raising concerns about the safety of Tibetans inside occupied Tibet. What makes it more worrying is the fact that CCP maintains a tight information blockade from information of and from Tibet with foreign journalists/ civil society not allowed access to Tibet.

One video from Lhasa, the capital of the Tibet Autonomous Region showed how the patients are held as captives in a temporary "quarantine hospital" where they are given only get one meal a day. A distressed woman from Lhasa posted a video berating the authorities for failing to provide adequate meals and care for people detained under the guise of covid prevention. In the video, she says the condition in detention is worse than in prison.

Another video showed how due to the closure of restaurants, shops and hotels in Tibet, local Tibetans in Lhasa had to distribute vegetables among themselves to sustain themselves. Twitter user Shepherd Tibetan tweeted, “From a credible source from Lhasa. China’s #COVID19 lockdown in Tibet spurred with rotten foods delivered to the lockdown arena makeshifts, causing panics to mass. With or without symptoms, whole villages of impacted areas are forced to live in the makeshifts.”

A video showed Chinese health workers spraying chemicals right at Tibetan's faces to 'disinfect' them in a quarantine concentration camp. A Tibetan woman & her baby are seen being directly sprayed by Covid workers in Qinghai. Earlier, videos of authorities disinfecting areas of Tibet were also shared widely in social media, with netizens questioning the unscientific way in the city was being ‘disinfected’.

A video shared by Tibetan organisation Students for Free Tibet highlighted how the Chinese government is using the guise of COVID protocol to further repress the Tibetan people. It showed the authorities moving perfectly healthy young children and elderly Tibetans to dark rooms with no access to food and medical treatment. The authorities are reportedly mixing healthy people with those who have tested positive and they are put together in the same rooms resulting in COVID19 spreading rapidly.

Reports of CCP censoring Weibo posts about COVID19 in Tibet are also pouring in. “The Weibo hashtag about the handling of the Tibetan coronavirus outbreak #西藏疫情防控# has been completely censored. This morning there we’re hundreds of posts. Now, nothing but an official press conference from August 11”, tweeted Alexander Boyd, Senior Editor, China Digital Times. A day before he tweeted, “Weibo is absolutely plastered with calls for help from Lhasa, in a manner similar to a recent surge from Ili (Ghulja), which censors eventually struck down in a three-pronged campaign of “comment flooding,” arrests, and media blitz of positive scenes”.

COVID19 cases are rising in the Xinjiang region too where the authorities are being called out for carrying out ‘Hunger Genocide’. Many Uyghurs have been found dead in recent days due to hunger and disease in their homes because of the inhumane restrictions, reports suggest. The Uyghurs are experiencing hunger, forced quarantines and dwindling supplies of medicine and food.

The situation in Tibet is frightening and Tibetans-in-exile are concerned about the safety of their fellow Tibetans in occupied-Tibet. With the CCP’s 20th National Party Congress to be held in a few days’ time, Chinese authorities are tightening their grip over Tibetans and Uyghurs and their fundamental freedoms curtailed in the name of its Zero-COVID policy.