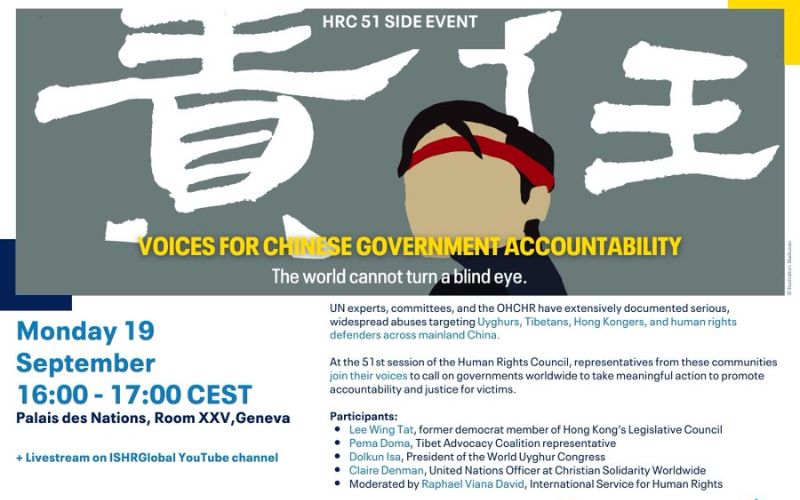 Geneva: The UN Human Rights Council 51st side event was held yesterday at Geneva, Switzerland. The purpose of this event was to raise voices for Chinese government accountability and that the world cannot turn a blind eye. The event was moderated by Raphael Viana David, International Service for Human Rights.

“UN experts, committees, and the OHCHR have extensively documented serious, widespread abuses targeting Uyghurs, Tibetans, Hong Kongers, and human rights defenders across mainland China. At the 51st session of the Human Rights Council, representatives from these communities join their voices to call on governments worldwide to take meaningful action to promote accountability and justice for victims,” noted International Service for Human Rights.

“It's common practice in Tibet for people and defenders to be detained for a long time without charge and It is imperative for HRC member States to push for meaningful investigation on the ground in Tibet,” said Pema Dolma, Tibet Advocacy Coalition representative. Pema, according to Students for Free Tibet, represented Tibet and Tibet Advocacy Coalition in this panel and gave important updates on the repressive climate under which Tibetans inside Tibet currently live in under Chinese occupation.

“Even if mandates are established, this should not prevent individual States to take action and send a signal that they won't accept human rights abuses by China,” said Claire Denman.

President of the World Uyghur Congress, Dolkun Isa noted that “There are only side events, not any other session on Human Rights Council 51st session, agenda about abuses against Uyghurs and International brands should cut ties with China.”