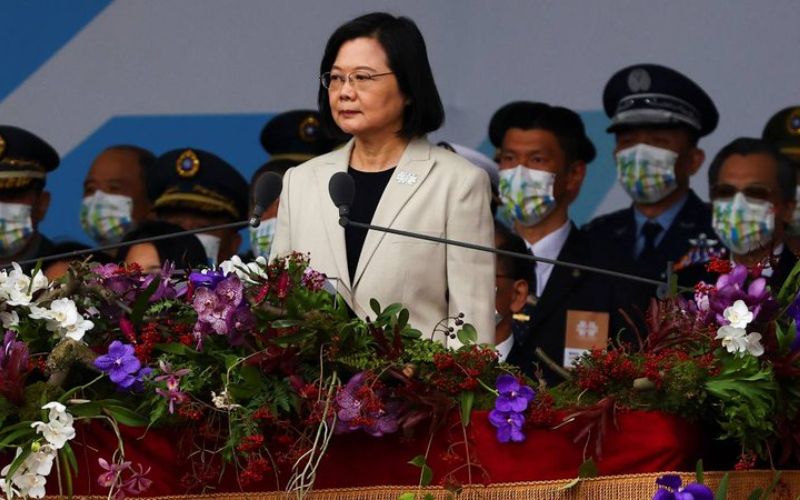 Taipei: Taiwan celebrates its ‘National Day’ today (10 October). The Taiwan National Day remembers the 1911 Wuchang Uprising which ultimately led to the creation of the Republic of China.

Taiwan’s leader warned China on Monday that the island would never give up its democratic way of life in a national day speech in which she drew parallels with Russia’s invasion of Ukraine.

The self-ruled democracy’s 23 million people live under the constant threat of invasion by China’s Communist Party, and Moscow’s war in Ukraine has deepened fears that Beijing might attempt something similar with the island.

In her speech, President Tsai Ing-wen compared Moscow’s invasion to Beijing’s goal of one day taking control of Taiwan which it has vowed to do, by force if necessary. “We absolutely cannot ignore the challenge that these military expansions pose to the free and democratic world order," she said.

“This year's Taiwan National Day projection mapping show is a tribute to life in #Taiwan, showcasing the cultures & memories of those who call it home. We're proud to have the Presidential Office building lit up with their stories”, Tsai Ing-wen Tweeted.

She added that “China’s threats of military action against Taiwan are “absolutely not an option” and will “only push our two sides further from each other,” China should not mistake competition within Taiwan’s multiparty democratic political system for weakness and “attempt to divide Taiwanese society.” “I want to make clear to the Beijing authorities that armed confrontation is absolutely not an option for our two sides,” Tsai noted.

“Only by respecting the commitment of the Taiwanese people to our sovereignty, democracy, and freedom can there be a foundation for resuming constructive interaction across the Taiwan Strait,” she said.

Tsai’s speech focused largely on Taiwan’s success in strengthening the social security net for an aging society and continuing to grow its high-tech economy despite the COVID-19 pandemic.