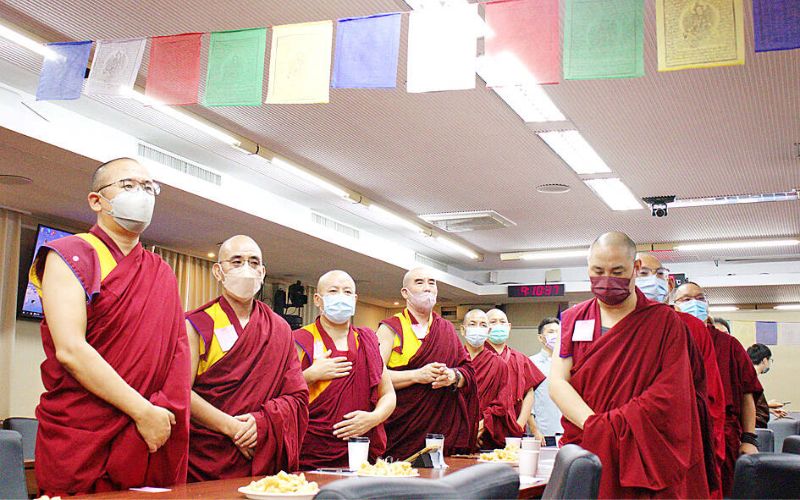 Taiwan and Tibet share a democratic way of governance, and China’s oppression cannot make Tibetans abandon their belief in democracy, the Central Tibetan Administration’s Sikyong Penpa Tsering said in a pre-recorded message at an event yesterday marking the 62nd anniversary of the founding of Tibet’s government-in-exile.

Tsering’s pre-recorded comments were played at an event at the legislature in Taipei jointly held by the Taiwan Tibetan Welfare Association, the Dalai Lama’s Tibet Education Foundation and the Taiwan Parliament Group for Tibet to mark the founding of the Tibetan parliament in exile.

The 14th Dalai Lama and 80,000 Tibetans were exiled after China invaded the country in 1959, and on Sept. 2, 1960, the Dalai Lama established the organization now known as the Tibetan government-in-exile, becoming the first democratic body in Tibet.

People sing the Tibetan anthem yesterday during an event at the Legislative Yuan in Taipei to mark the 62nd anniversary of the founding of Tibet’s government-in-exile.

Taiwan has experienced increased Chinese aggression around its territory this year, Tsering said. However, he said he believes that Taiwan is prepared to counter China’s threat and prevent a Chinese invasion. Independent Legislator Freddy Lim said at the event that the Tibetan efforts over the past two decades had not been wasted, citing the first democratic election of the Central Tibetan Administration’s Sikyong Lobsang Sangay in 2012.

The act symbolizes Tibet’s maturity as a nation and that the Sikyong is no longer a symbolic role, Lim said. Taiwan Parliament Group for Tibet Deputy Director-General Hung Shen-han said he witnessed the accomplishments of the Central Tibetan Administration’s efforts over the past 10 years when in June he attended the 8th World Parliamentarians Convention on Tibet with Lim.

The attending members talked not only about Tibet, but also about how the international community should act against the oppression of authoritarian states, Hung said. Tibetans have experiences to share with other countries suffering Chinese oppression, Hung added.

Democratic Progressive Party Legislator Michelle Lin said that many support a democratic Tibetan government, adding that she hopes Tibetans continue their fight against the tyranny of the Chinese.

Wuer Kaixi, a prominent leader of China’s 1989 Tiananmen Square protests and living in exile in Taiwan, said his people, the Uighurs, have paid a great price for their resistance, but their sacrifice has allowed the world to understand the nature of the Chinese government.