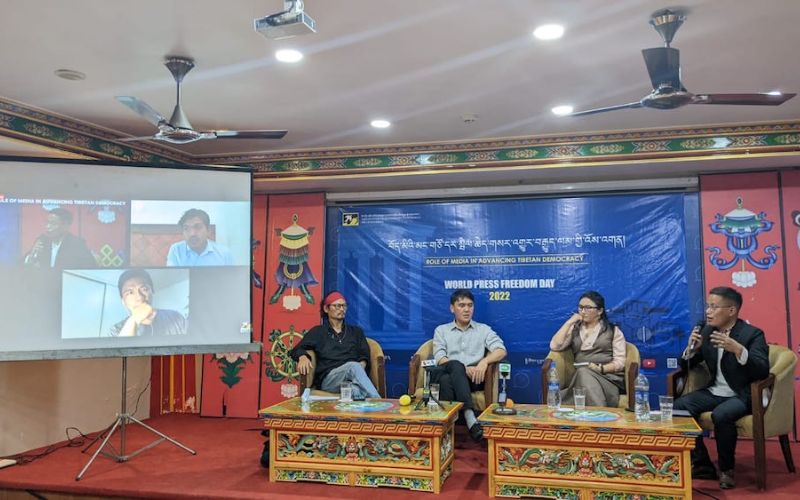 Dharamshala: On the occasion of World Press Freedom Day, the Tibetan Centre for Human Rights and Democracy in Dharamshala organised a roundtable discussion with a varied panel on the role of media in supporting democracy on Tuesday. The panellists examined the challenges and drawbacks that the exiled media community faces, as well as the dangers and opportunities that could assist build the fledgling democracy.

MP Pema Tso pointed out that social messaging apps have become sources of information from inside Tibet, posing both an opportunity and a risk in reporting on certain topics. "We can't possible go to Tibet's most sensitive region to obtain information." But we can work with a sense of responsibility for both the struggle and the people of Tibet," she urged the crowd.

In the recent decade, the rise of social media has enabled both a speedy flow of information and a forum for hate speech directed at a group or an individual. Sherab Woeser, Deputy Program Director of Tibet Fund, recounted his experiences to illustrate some of the rigidities that come with being in exile, while simultaneously criticising the CCP and its policies. "My work in the media has mostly focused on news from Tibet, and this should continue to be the principal source of worry for the Tibetan people." However, whether it is in the context of foreign media or to combat online disinformation in exile, we need to be more resilient in choosing the correct kind of material for our readers, and balance varied repercussions," he stated in response to a question from the audience.

Lobsang Gyatso, a member of Parliament, underlined the dangers of digital security in the age of social media. "In the last decade, as the internet has grown in popularity, more channels have emerged enabling the general population to participate in the creation of news material. "A major transformation in the organisation of the news media is required," he said in his opening remarks, adding that the media has an additional responsibility to engage in "active" reporting when it comes to problems of justice.

Former TCHRD researcher Tenzin Nyinjey also brought up the issue of forceful reporting in relation to making persons in positions of power accountable, especially in the Tibetan diaspora. "Issues confronting the general public must be at the forefront of media discussion. "A journalist's job is to hold accountable the elected government, organisations, and persons in power who may use their positions for personal advantage," he added, adding that journalists should conduct research in order to report on relevant subjects.

Tenzin Tsundue, a poet, also raised the issue of revitalising media in the changing era of internet news production. He said that Tibet TV and Tibet.net, both owned by the CTA, prefer to focus on events rather than real issues. "Most of CTA's news focuses on reporting visits by Tibetan leaders or on initiatives that have been launched. It may appear that the elected leader is more important than the general populace at times. "I'm referring to both the present and prior Sikyong[s]," he continued.