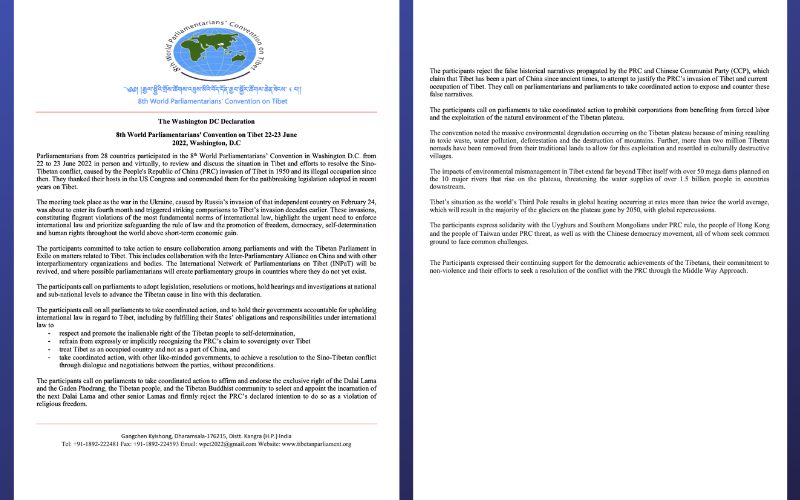 Washington DC : The eighth World Parliamentarians' Convention on Tibet organised by the Tibetan Parliament-in-Exile (TPiE) was held in Washington DC, with over 100 participants representing 28 nations from 22 to 23 June 2022. The convention concluded with the Washington DC Declaration.

“Parliamentarians from 28 countries participated in the 8th World Parliamentarians’ Convention in Washington D.C. from 22 to 23 June 2022 in person and virtually, to review and discuss the situation in Tibet and efforts to resolve the Sino-Tibetan conflict, caused by the PRC’s invasion of Tibet in 1950 and its illegal occupation since then. They thanked their hosts in the US Congress and commended them for the path breaking legislation adopted in recent years on Tibet,” said the declaration.

“The meeting took place as the war in the Ukraine, caused by Russia’s invasion of that independent country on February 24, was about to enter its fourth month and triggered striking comparisons to Tibet’s invasion decades earlier. These invasions, constituting flagrant violations of the most fundamental norms of international law, highlight the urgent need to enforce international law and prioritize safeguarding the rule of law and the promotion of freedom, democracy, self-determination and human rights throughout the world above short-term economic gain,” it continues.

“The participants call on parliaments to adopt legislation, resolutions or motions, hold hearings and investigations at national and sub-national levels to advance the Tibetan cause in line with this declaration,” it stated.

“The participants call on all parliaments to take coordinated action, and to hold their governments accountable for upholding international law in regard to Tibet, including by fulfilling their States’ obligations and responsibilities under international law to:

“The participants call on parliaments to take coordinated action to affirm and endorse the exclusive right of the Dalai Lama and the Gaden Phodrang, the Tibetan people, and the Tibetan Buddhist community to select and appoint the incarnation of the next Dalai Lama and other senior Lamas and firmly reject the PRC’s declared intention to do so as a violation of religious freedom.

“The participants reject the false historical narratives propagated by the PRC and CCP, which claim that Tibet has been a part of China since ancient times, to attempt to justify the PRC’s invasion of Tibet and current occupation of Tibet. They call on parliamentarians and parliaments to take coordinated action to expose and counter these false narratives.

“The participants call on parliaments to take coordinated action to prohibit corporations from benefiting from forced labor and the exploitation of the natural environment of the Tibetan plateau.

“The convention noted the massive environmental degradation occurring on the Tibetan plateau because of mining resulting in toxic waste, water pollution, deforestation and the destruction of mountains. Further, more than two million Tibetan nomads have been removed from their traditional lands to allow for this exploitation and resettled in culturally destructive villages.

“The impacts of environmental mismanagement in Tibet extend far beyond Tibet itself with over 50 mega-dams planned on the 10 major rivers that rise on the Plateau, threatening the water supplies of over 1.5 billion people in countries downstream.

“Tibet’s situation as the world’s Third Pole results in global heating occurring at rates more than twice the world average, which will result in the majority of the glaciers on the plateau gone by 2050, with global repercussions.

“The participants express solidarity with the Uyghurs and Southern Mongolians under PRC rule, the people of Hong Kong and the people of Taiwan under PRC threat, as well as with the Chinese democracy movement, all of whom seek common ground to face common challenges.

“The Participants expressed their continuing support for the democratic achievements of the Tibetans, their commitment to non-violence and their efforts to seek a resolution of the conflict with the PRC through the Middle Way Approach,” concluded the Washington DC Declaration.