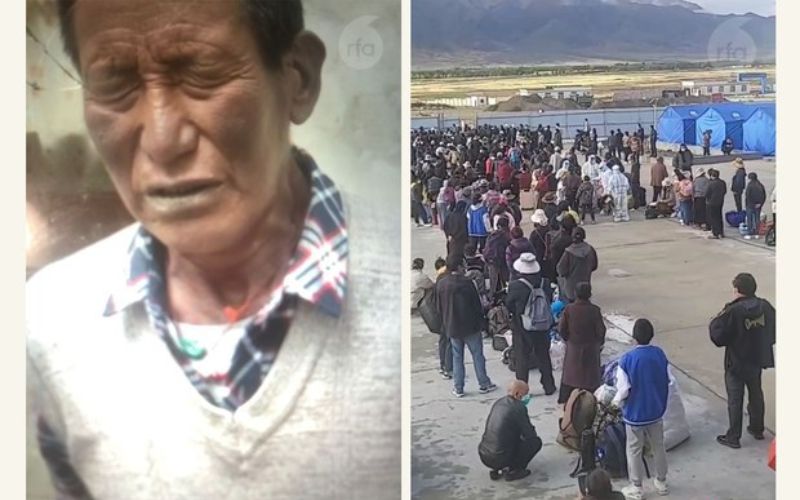 Three Tibetans passed away from COVID19 in Tibet: RFA

Lhasa: Three Tibetans have recently passed away from COVID-19 as the virus continues to spread across Tibet Autonomous Region and local netizens complain of harsh and unsanitary quarantine procedures, reports RFA.

Sources in Tibet and in exile identified the dead as Penpa Tsering from Lhasa Toelung Dechen (in Chinese, Duilongdeqing); Ajho Penpa from Shigatse (Rikaze); and an unidentified Tibetan in Gyantse (Jiangzi).

All three died at home after failing to receive timely medical care, sources told RFA. “They died because they did not get the treatment they needed on time," one source said, speaking on condition of anonymity for security reasons.

Penpa Tsering, 62, was a doctor by profession and had lived in India, but was unable to return after traveling to Tibet in 2005 to visit relatives, RFA’s source said.

“After getting COVID, he experienced a severe cough and body aches, which led to his death at home," the source said.

In Shigatse, Ajho Penpa’s family was not allowed to burn his body for six days, a Tibetan living in exile said, citing contacts in the TAR. “But local Chinese staff eventually came to take his body away. A sign that read 'COVID positive family' was then hung outside their door.”

The Chinese government has not reported a single death due to COVID in the TAR region, the source said. “But we believe that many Tibetans have died, and the authorities are confining people together in quarantine facilities whether they are COVID positive or not.”

Chinese authorities imposed a lockdown 31 days ago in Lhasa as COVID numbers there and across China continue to climb, with government sources reporting 16,327 cases of infection in the TAR alone by Thursday. Tibetan netizens meanwhile say the lockdown order came leaving them no time to prepare, with people in many cases left short of food. Finding treatment for COVID-positive patients has also proven difficult, sources say.

Tibetans posting videos on Chinese social media platforms have criticized quarantine facilities, saying they lack provisions for sanitation and that medical staff often fail to wash their hands after conducting tests. Others posted photos and videos of infected people left standing for hours in the streets of Lhasa because authorities cannot quickly transport them to designated facilities.