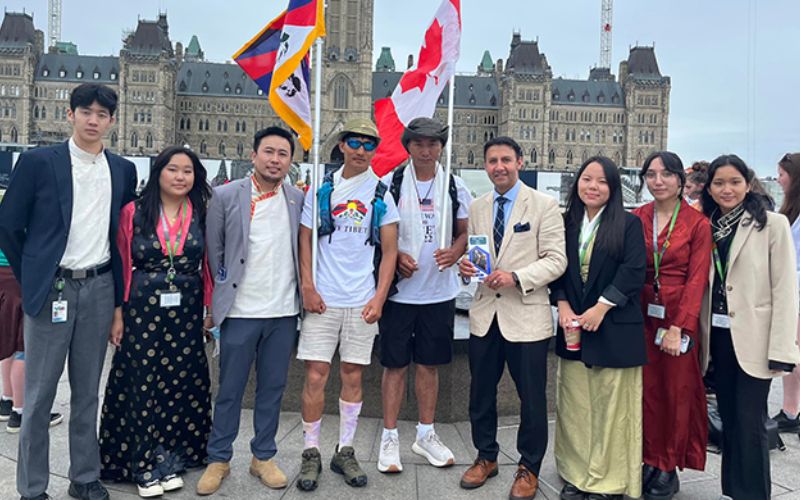 Ottawa: Tibetan activists Sangyal Kyab and Rabga reached Ottawa on their eleventh day of the “Peace Walk for Tibet”, where they met with Members of the Canadian parliament to garner support for the Tibetan cause.

Tibetan activists Sangyal Kyab from Toronto and Rabga from Minnesota, USA, have reached Ottawa on their eleventh day of walking to the Chinese Embassy in Ottawa from the Chinese Consulate in Toronto as part of their third Peace Walk for Tibet.

In Ottawa, they stopped at the Canadian parliament to meet with members of Parliament, MP Elizabeth May, MP Garnett Genius and MP Arif Virani, to highlight the oppression of the Tibetan people by the Chinese government.

MP Arif Virani, a member of the Liberal Party, applauded the duo for taking up the cause and committing to the 800 Km journey for three consecutive years. He also affirmed support for the Tibetan people and for the return of His Holiness the Dalai Lama to his homeland of Tibet.

The Activists say they started the peace walk with five demands to the international community and Canada to support Tibet, which are 1. To support the return of His Holiness the Dalai Lama to Tibet.  2. To renew the Sino-Tibet dialogue in good faith. 3. To release the 11th Panchen Lama and other political prisoners in Tibet. 4. To support human rights in Tibet because living under immense repression, more than 170 Tibetans have self-immolated since 2009. 5. China stops reckless development policies are devastating Tibet’s environment, putting the whole planet at risk.

Sangyal Kyab and Rabjee were supported by locals and Tibetan-Canadians on their journey to Ottawa. The next stop for activists is the Chinese Embassy in Ottawa before returning to Toronto.