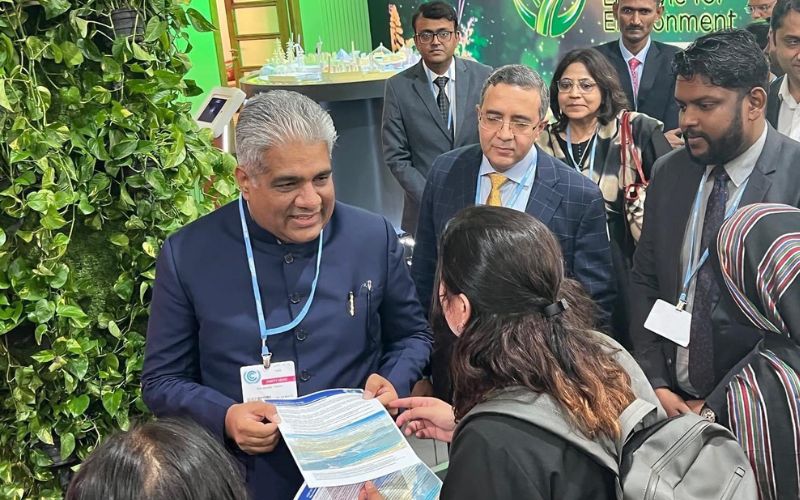 Sharm El-Sheikh: The all-woman Tibetan delegation at COP27 met India’s Union Minister for Forest and Climate Change Bhupender Yadav and handed over their briefing paper. The delegation will attend the conference and urge world leaders and policymakers to recognise the ecological importance of Tibet, include Tibetan experts in talks and adopt a rights-based approach that empowers and engages frontline communities.

The five-member delegation are TPI research fellow Dhondup Wangmo, SFT activist Khenzom Alling, ITN researcher Dr. Lobsang Yangtso, SFT Executive Director Pema Doma, and Tibet Watch researcher Tenzin Choekyi. “We are travelling to Egypt because we strongly believe that Tibetan voices must be heard. Failure to address the occupation of our country or include Tibetans in a solution to the global climate crisis will leave the world with an environmental time bomb, one which risks devastating billions of lives across Asia unless it is diffused,” the group said in the joint statement prior to their departure to Egypt.

The team were able to start discussions about the importance of Tibet as a global climate issue with various delegations including Bangladesh and South Africa and were even able to raise Tibet with Scotland’s First Minister, Nicola Sturgeon and former US Vice President Al Gore, Hollywood Actor and environmental campaigner Leonardo DiCaprio, and United States Special Presidential Envoy for Climate John Kerry. They also handed the ‘5-Point Call to Action for Tibet’ leaflets to the prominent personalities and other delegates.