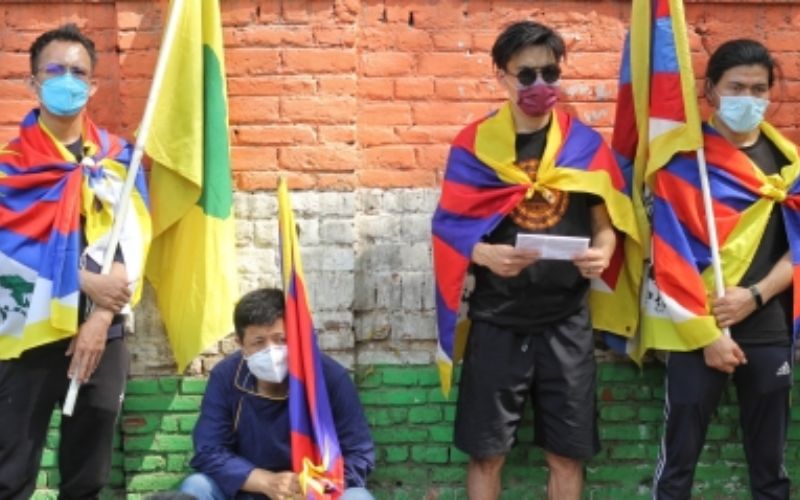 Dharamshala: Tibetan activists from four major NGO’s in Dharamshala observed International Justice Day on Sunday and held protests against China’s human rights violations and atrocities across Tibet. Tibetans in the hill state highlighted various incidents of atrocities and oppression by the Chinese government on the people of Tibet through various programmes.

International Justice Day shows the importance of ensuring accountability for some of the most serious crimes as genocide, murder, forced detention and unfair imprisonment and punishing criminals and bringing justice to people who have been tortured by someone else.

Tibetan Women's Association (a women's group based in Mcleod Ganj, Dharamsala), National Democratic Party of Tibet (a major political party in the Tibetan government in exile), Gu Chu Sum Movement Association of Tibet (non-governmental Organisation in Himachal Pradesh) and Students for a Free Tibet (global grassroots network of students and activists working in solidarity with the Tibetan people) held large-scale demonstrations against Chinese atrocities against the people of Tibet at the Main Square in Mcleod Ganj, Dharamsala on Sunday.

Tsering Dolma, Vice-President of the Tibetan Women's Association, said it was important to observed the International Justice Day by acknowledging the human rights violations inside Tibet by the dictatorial Chinese Communist Party. She added that during the 20th century, the Chinese Communist Party began its invasion of Tibet in 1949 by annexing Tibet's Amdo and Kham provinces.

“After China illegally occupied the entire Tibet in 1959, a martial law was imposed to crackdown on the Tibetan resistance movement. As many as six million people died in Tibet due to the invasion and illegal occupation by China, and many Tibetans were also forced to leave their homeland and live in exile,” Dolma said.

“The people of Tibet were denied justice and are fighting against atrocities committed against them violating basic human rights and freedom. The evidence of the human rights situation within Tibet is clear when His Holiness, the Panchen Lama, was forcibly abducted by the Chinese government at the age of six,” Dolma said.

By deliberately separating Tibetan children from their families and culture and keeping them in government boarding schools. Chinese authorities are using one of the most heinous means of colonialism to attack Tibetan identity.