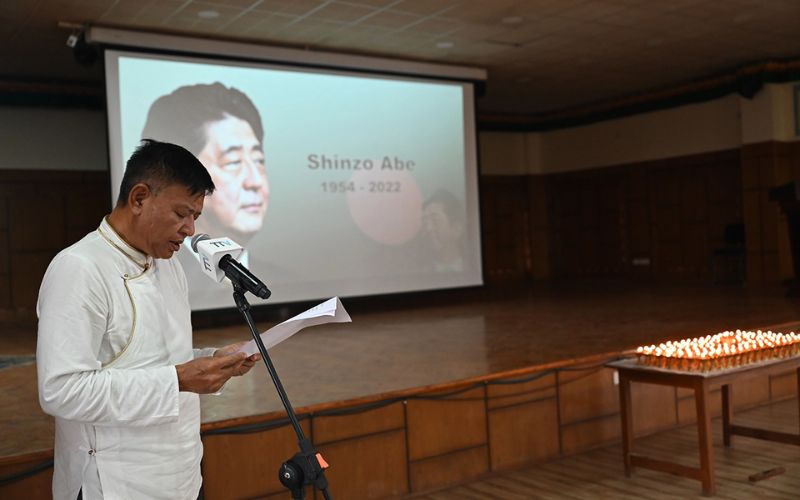 Dharamshala: Following the assassination of the former Japanese PM Shinzo Abe, the exiled Tibetan leaders have expressed grief over his death on Friday. Hours after the news of Abe’s assassination surfaced, the exiled leader His Holiness the Dalai Lama wrote to his wife Abe Akie to express his condolences over his demise, “I am deeply saddened to hear that my friend, Mr. Abe Shinzo has passed away following a gunshot attack this morning. . . As you know, your late husband was a steadfast friend of the Tibetan people. I very much appreciated his friendship and support of our efforts to preserve our rich Buddhist cultural heritage and identity.”

The head of the Central Tibetan Administration, Sikyong Penpa Tsering took to twitter to express his shock over the death of the Japanese leader, “Today the world has lost a great leader to a senseless act of violence. With the passing of Shinzo Abe, the Tibetan people have lost a long-time friend and supporter of the Tibet cause. We grieve alongside his bereaved family and the people of Japan.” Japan’s longest-serving PM Abe remained critical for a few hours after he was shot during a public event, but ultimately succumbed to his injuries.

The officials and staff of the Dharamshala-based Tibetan government-in-exile held a mass prayer on Monday to mourn the death of the longest serving Japanese PM. At the prayer ceremony, the Sikyong reiterated the loss of such a powerful leader. “With profound gratitude and obeisance, the Tibetan administration and the Tibetans will eternally remember his notable contribution and support to the Tibetan cause, particularly his active involvement in establishing All Party Japanese Parliamentary Support Group of Tibet, comprising one of the largest Tibet supporters,” he added.

The Dalai Lama and Abe last met in November 2012 when he was a member of the Japanese Parliament. “We lawmakers here are in complete agreement that we want to help the suffering Tibetan people and help create a Tibet in which people do not have to kill themselves in a quest for freedom,” Abe had said during the Dalai Lama’s visit to Tokyo in 2012.

Under Abe, the Tibetan issue received a highlighted support from Tokyo with the formation of the All-Party Japanese Parliamentary Support Group of Tibet, the largest pro-Tibet legislative body in the world. He was also a vocal supporter of the Dalai Lama and the Tibetan issue despite objections from China.