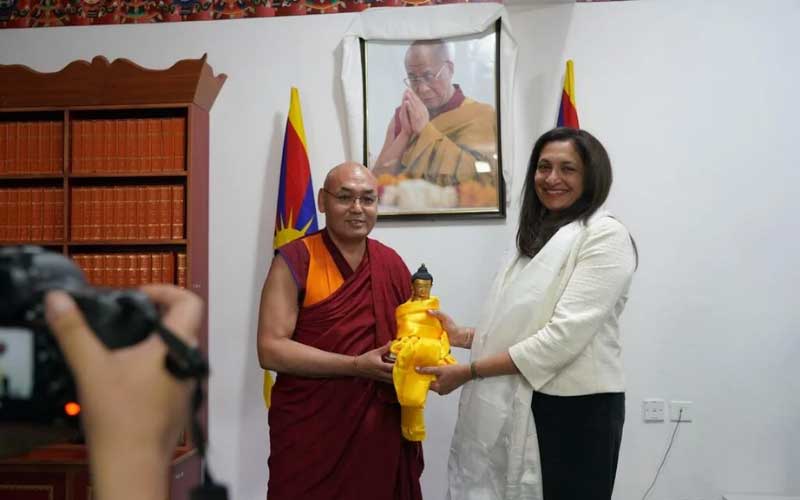 Dharamshala: The Under Secretary-led US delegation was received warmly in a Tibetan tradition by Speaker Khenpo Sonam Tenphel, Deputy Speaker Dolma Tsering Teykhang, members of the Standing Committee, members of the Public Accounts Committee, and staff of the Parliamentary secretariat.

While touring the Parliament, the high-level US was briefed on the evolution, composition, and functioning of the Tibetan Parliament-in-Exile and introduced to the members of the Standing Committee and Public Accounts Committee by Deputy Speaker Dolma Tsering Teykhang.

Gathering at the Standing Committee’s Hall, they had a productive meeting discussing issues pertaining to Tibet and Tibetans. Speaker Khenpo Sonam Tenphel extended his gratitude on behalf of all the Tibetans and the Tibetan Parliament-in-Exile for the consistent support provided by the US and its people and urged for its continued support adding, “your visit to Dharamsala sends a clear message to the Chinese government.”.

While Deputy Speaker Dolma Tsering Teykhang apprised the Under Secretary led US delegation members on the TPiE’s upcoming programs and projects and on the current critical situation inside Tibet.

Under Secretary Uzra Zeya, US Special Coordinator for Tibetan Issues was presented with a statue of Buddha by the Speaker and Chargé d’Affaires Ms. Patricia Lacina, and USAID Deputy Assistant Administrator Ms. Änjali Kaur were presented with Thangkas of Avalokiteshvara.