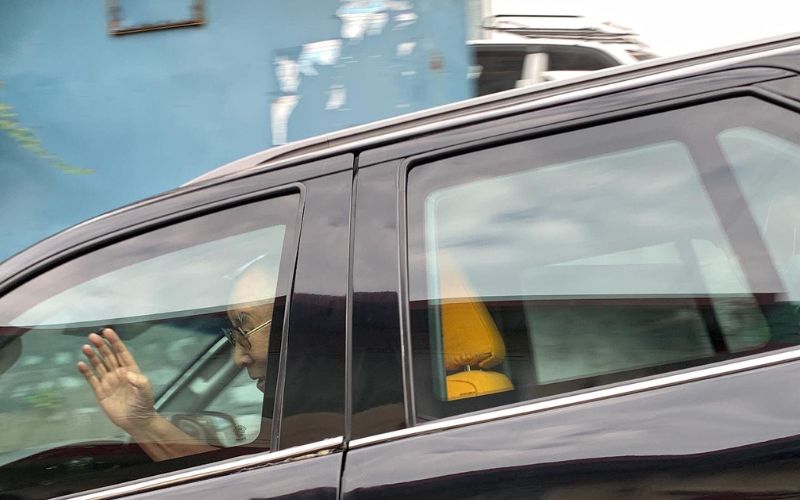 Dharamshala: According to reports, His Holiness the 14th Dalai Lama left Dharamshala early morning today to visit Jammu and Ladakh as a part of this two-day tour. The Tibetan spiritual leader is likely to stay in Jammu tonight and reach the Union Territory of Ladakh tomorrow.

Tibetans and devotees in Dharamshala lined up in queues at the break of the dawn to catch a glimpse of His Holiness the Dalai Lama and see off his departure for Ladakh this morning. This is His Holiness’s first trip outside his residence in Dharamshala since the emergence of the global pandemic as he has only granted virtual and in-person audiences until now.

This visit is also taking place just three days before the 16th round of Corps Commander-level meetings between India and China, which according to sources is expected to start on July 17. During his tour, the Dalai Lama is expected to visit the famous Thiksay monastery in Leh.

The Tibetan spiritual leader's trip is likely to irk China as Beijing had recently criticized Prime Minister Modi, for extending wishes to the Dalai Lama who recently celebrated his 87th birthday, stating that India should stop using Tibet-related issues to interfere in China's internal affairs.

"His Holiness is accorded all due courtesies and freedom to conduct his religious and spiritual activities in India. His Holiness' birthday is celebrated by many of his followers in India and abroad. The birthday greetings by the Prime Minister to his Holiness on his 87th birthday should be seen in this overall context," Bagchi said.

Beijing has always had an issue with Dalai Lama since he took shelter in India. In the 1950s, when China illegally occupied Tibet, the Tibetan Spiritual leader had to take shelter in India. The Dalai Lama tried to advocate for a mid-way negotiation with China to peacefully resolve the issue of Tibet.

Meanwhile, India and China have been engaged in a standoff since April-May 2020 over the transgressions by the Chinese Army in multiple areas including the Finger area, Galwan Valley, Hot springs, and Kongrung Nala. The situation worsened after violent clashes with Chinese troops in Galwan Valley in June 2020.