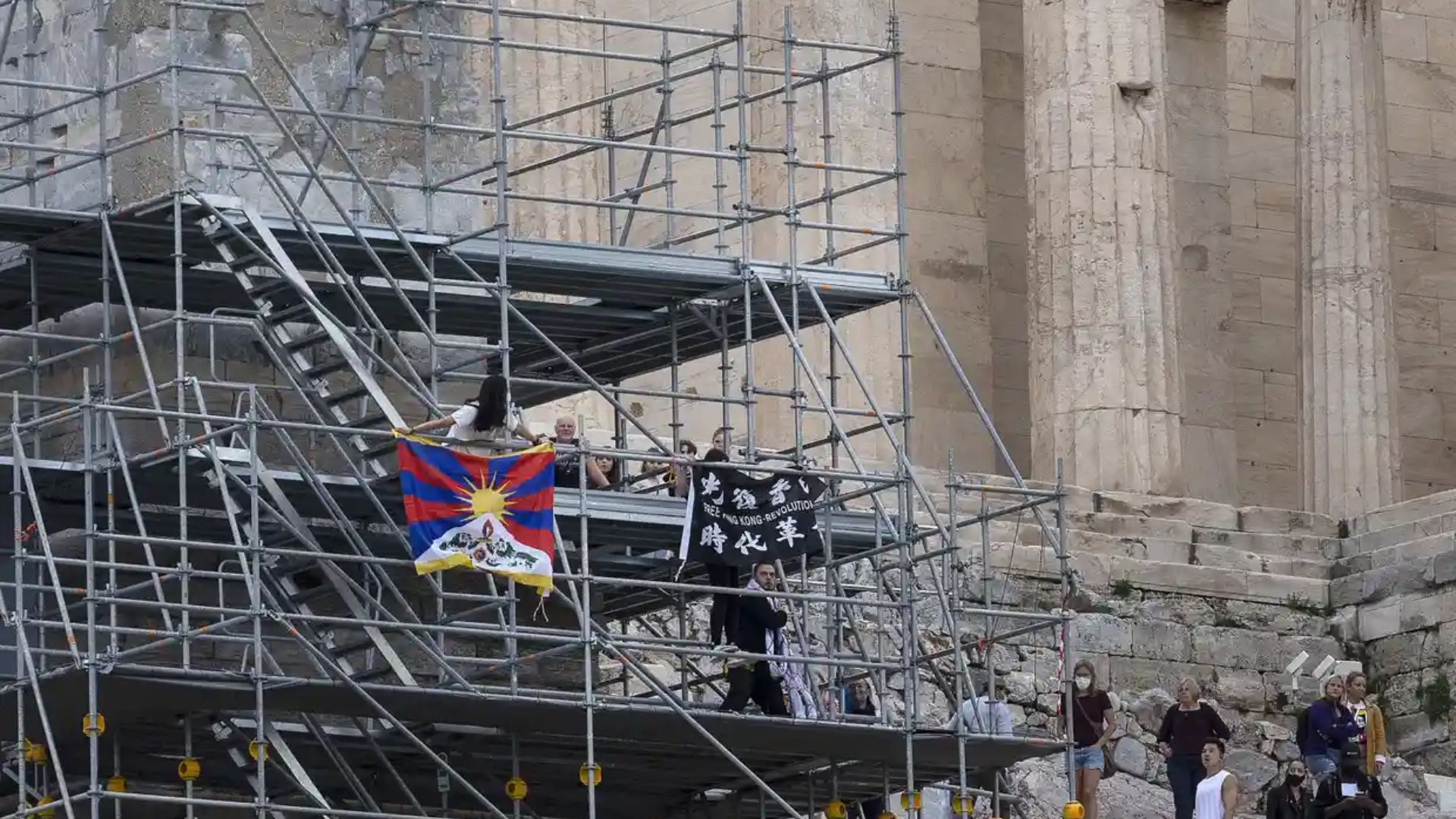 A Greek court has acquitted activists who were accused of attempting to "pollute, damage, and distort" the Acropolis after they hung a banner there in protest of China's policies in Tibet. A three-member tribunal dismissed the charge on Thursday in a landmark decision that was hailed as a victory for human rights advocates worldwide. Just a few minutes earlier, a public prosecutor had called for a guilty verdict.

Tsela, a 19-year-old Tibetan student activist, and Joey, a 22-year-old Hong Kong activist, traveled to the Acropolis site on October 17, 2021. There, they hung a flag in support of freedom in Hong Kong and one in support of Tibet from scaffolding while chanting "Boycott Beijing 2022" and "Free Tibet."

“Tsela Zoksang, Joey Siu and a Vietnamese American partner have all been found not liable on the charges made against them by Athens police”, tweeted Student for Free Tibet.

Michael Polak, a barrister with the legal aid organization Justice Abroad who had flown in from London for the hearing, stated, "This is a huge victory for freedom of expression and the right to peaceful protest in Europe." Polak had attended the hearing. Additionally, it is a significant victory for Hong Kongers and Tibetans," he added.

According to Polak, "the acquittals today will send a strong message that legitimate peaceful protests and assembly, of the type banned completely in China and Hong Kong, will be allowed even when it hurts the fragile sensibilities of the Beijing and Hong Kong regimes," even though Chinese authorities have previously acted in the belief that they could extend their repression against ethnic and religious groups worldwide.

If convicted of a charge that was considered a serious crime under Greek law, the two student activists—a Hong Kongese American and a Tibetan American—could have been sentenced to up to five years in prison.

After waving a Tibetan flag in front of Chinese officials attending the celebration in ancient Olympia, they were also charged with attempting to pollute, damage, and distort a historical monument. After being postponed in February, a trial has been scheduled for December 1, with claims that it was delayed to avoid embarrassing China on the eve of the Games.

The activists claimed in both instances that they were protesting against a regime that was not only responsible for the oppression of the Uyghur people, which even a much-maligned UN report stated may amount to crimes against humanity, but also for the crackdown on freedom of expression in Hong Kong and the brutal repression of Tibetans. Additionally, the regime was using Olympic symbols for propaganda purposes.

Due to China's role as a major investor in Greece, rights groups had feared the outcome was far from certain. However, Greece's most prominent human rights lawyer, Alexis Anagnostakis, defended the pair during the hearing by arguing that similar protests at the Acropolis and other European historic sites had never been prosecuted under "the unfounded charge" of attempting to destroy a monument.

He stated to the Guardian, "It was a good day for human rights defenders around the world." In the end, justice and the rule of law prevailed in a case that was extremely politically charged.