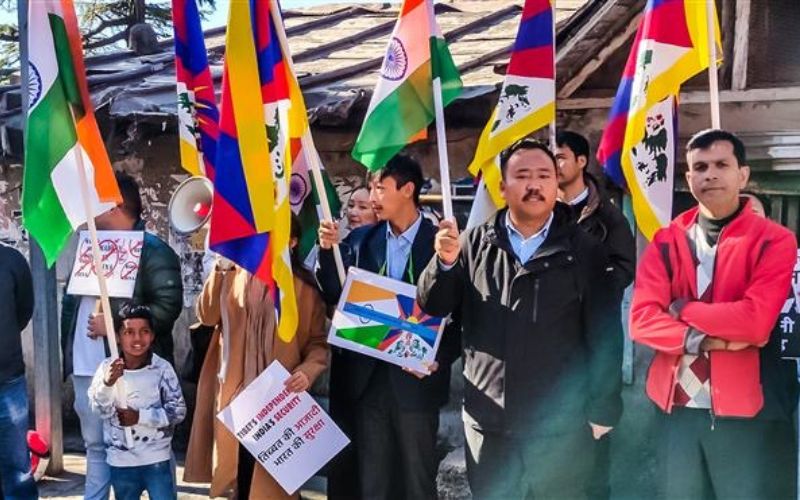 Tibetans in exile protest against Chinese encroachment in Tawang

On December 9, Tibetan refugees in Dharmshala, Himachal Pradesh, protested against China's incursion into Indian territory in the Tawang sector of Arunachal Pradesh and urged India to reconsider its One China Policy. The Tibetans condemned the actions of the Chinese People's Liberation Army (PLA) as they raised slogans demanding Tibet's independence from China.

"We have gathered here to show our support for the Indian Army as well as the Indian people in general. Being Tibetan refugees, we have been demanding Tibet's independence from China," said Rinzin Choedon, the Director of Students for a free Tibet.

She said that India never had a border issue with Tibet when it was an independent country. "However, since Tibet was illegally occupied by China in 1959, we have seen ongoing border incursions and the tactics of intimidation by the Chinese Communist regime," she alleged.

She added, "China is using these tactics to distract attention from the ongoing crisis in the country where the Chinese people are demanding democracy and liberation from the Communist regime."

"One-China Policy strictly affects India's goal of having a secure border," stated Tashi Wangchuk, President of the National Democratic Party of Tibet. Because the Indian government views Tibet as a part of China, China is gaining ground and asserting that Arunachal Pradesh and Ladakh are also parts of Tibet.

On Tuesday, Defence Minister Rajnath Singh told parliament that Chinese People's Liberation Army (PLA) troops tried to cross the Line of Actual Control in the Yangtse area of the Tawang Sector in Arunachal Pradesh and unilaterally change the status quo, but they were sent back because Indian military commanders intervened quickly.

"On December 9, 2022, PLA troops attempted to unilaterally alter the status quo and violate the LAC in the Yangtse area of Tawang Sector.  "The Indian Army bravely prevented the PLA from transgressing into our territory and forced them to return to their posts in the ensuing face-off," Singh stated in Parliament. "Our forces are committed to protecting our territorial integrity and will continue to thwart any attempt made on it," the defense minister assured parliament.