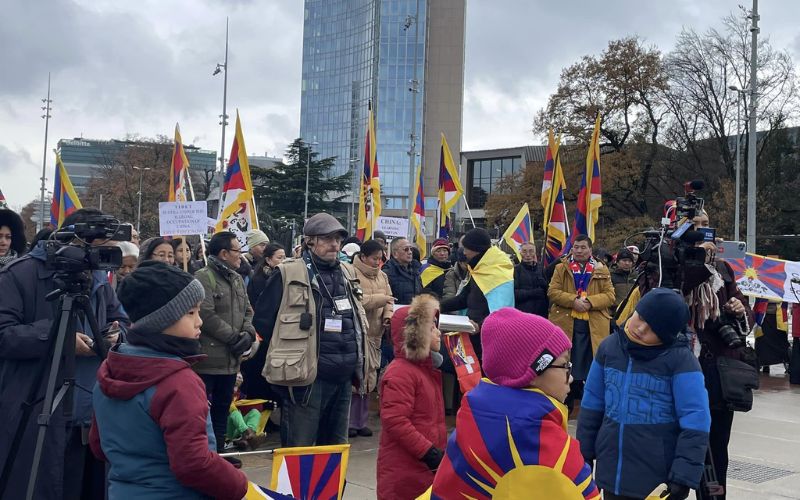 On December 10, 2022, the Tibetan community in Switzerland and Liechtenstein organized a peace march and demonstration from the High Commissioner for Human Rights to the UN Human Rights Council building in protest against China's ongoing violations of human rights in Tibet. This day marks the 74th anniversary of the Universal Declaration of Human Rights.

The OOT organised a protest demonstration and a 2-mile march from the Palais Wilson, the Old League of Nations building, to the Broken Chair Square on December 10 in observance of International Human Rights Day and His Holiness the Dalai Lama's Noble Prize.

Slogans demanded Tibet's independence and urged the UN to put pressure on China in this direction. About 200 people took part. It was effective.

Tibetans are displaying a banner that reads "Solidarity with the Tibetan People." A march and slogan of protest against the deteriorating human rights situation in Tibet on International Human Rights Day. "We demand Human Rights in Tibet," "Tibet is burning, China is dying," "Release Panchen Lama," "We want justice in Tibet," "Release all the political prisoners," "Long Live Dalai Lama," "Let the Dalai Lama return in Tibet," "United Nations wake up," "Shame on Chinese government," "Free Tibet," "Save Tibet," and "Tibetan Language is not a crime" were some of the slogans.

The torch of the Tibetan Freedom Movement has been handed down to the new generation. For Tibet's freedom, peace, and human rights, Tibetans have not and will not give up.