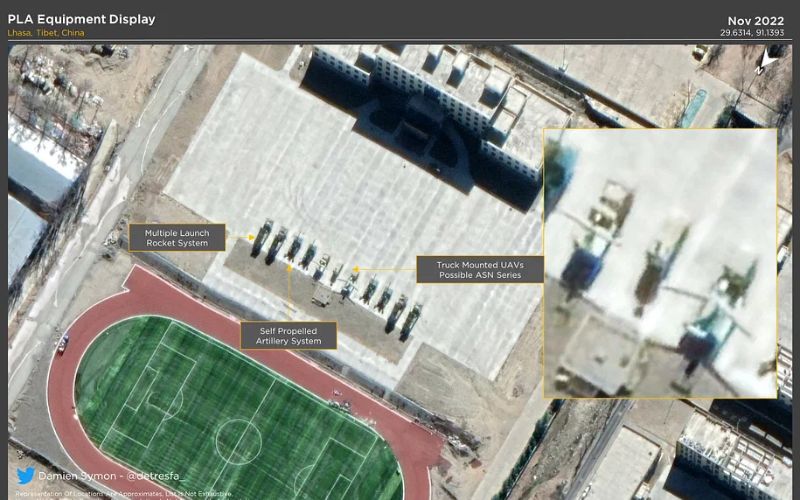 Recent satellite imagery of a Chinese military garrison on the Tibetan plateau shows truck-mounted unmanned aerial vehicles. On 08 January, Open-source intelligence analyst Damien Symon posted an image of a People's Liberation Army (PLA) base in Tibet's capital, Lhasa, that was taken in November 2022.

The change occurs when India and China are tense along the Line of Actual Control, or LAC. The photo was probably shot a few weeks prior to the confrontation and fighting in Tawang, Arunachal, in December 2022.

China may have a significant advantage in that truck-mounted UAVs may be swiftly and easily deployed to various sites over rugged terrain. This mobility could allow the UAVs to be deployed to areas where they are needed in a timely manner.

For example, if there is a sudden escalation of tensions or a need for surveillance in a specific area, the UAVs could be quickly moved to that location to gather information or provide situational awareness.

In addition to the ability to deploy to different locations on rough terrain, another advantage of truck-mounted UAVs in mountainous or difficult-to-access areas is that they do not require a runway for landing and taking off. This means that they can operate from relatively small or improvised landing areas, such as the bed of a truck or a flat stretch of ground.

This is in contrast to larger aircraft, which typically require a long, flat surface for take-off and landing, making them less practical for use in areas with limited infrastructure or rugged terrain.

The ability of truck-mounted UAVs to operate from small or improvised landing areas could make them an ideal choice for gathering information or providing surveillance in remote or difficult-to-reach areas of the Himalayas.