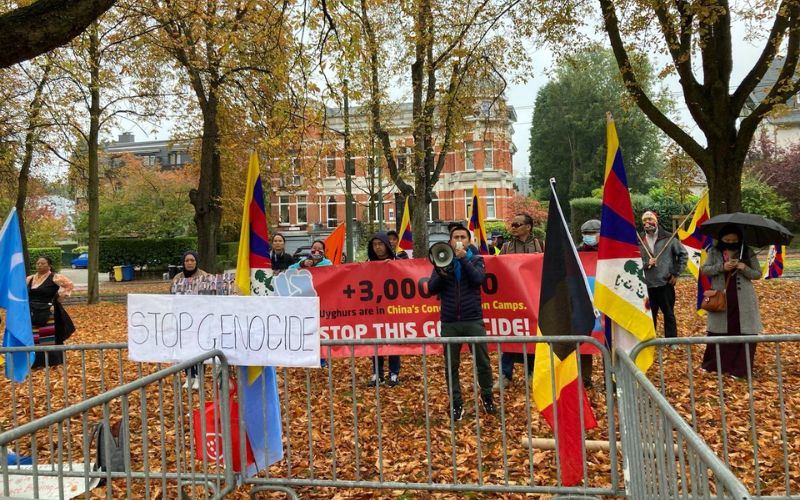 Uyghurs and Tibetans Protest in Brussels against China’s atrocities

Brussels: Uyghur rights groups and Tibetans community in Belgium gathered to expose China’s atrocities and protested Infront of the Chinese Embassy in Brussels on Oct 14. Meanwhile to keep the narrative alive on China. World Uyghurs Congress (WUC) said that China worked to defeat the resolution in UNHRC recently only to hide its misdeeds.

The communities called upon the Chinese authorities to end the human rights atrocities against Uyghurs, Tibetans & other ethnic minorities.

WUC calls upon Xi Jinping to review repressive policies against Uyghurs on their recent press release on the 20th Chinese Communist Party Congress.

“In ten years under his leadership, the CCP has orchestrated and implemented a policy of repression against the Uyghurs and other Turkic peoples in East Turkistan that are now internationally recognized as crimes against humanity and genocide,” said WUC President Dolkun Isa.

During Xi Jinping’s last two terms, millions of Uyghurs have been arbitrarily detained in concentration camps, where they are subjected to torture, sexual and gender-based violence and rape, malnutrition, and extremely unsanitary conditions. Throughout East Turkistan as a whole, the Uyghur people have further suffered from forced labour, birth prevention policies, family separation, and the destruction of cultural and religious sites and buildings.

Even in the last months, the repression in East Turkistan has shown no signs of slowing down. Under extremely harsh lockdowns, which have left many affected Uyghurs without essential resources such as food and medicine, Uyghurs have taken to social media to appeal for help. Given the lack of these essential supplies, it has been reported that over 20 Uyghurs have died from starvation or a lack of medical aid.

The genocidal policies of the CCP against the Uyghur people have had a detrimental impact on the future of the Uyghur people. Apart from the severe transgenerational trauma, statistics about Uyghur birth rates have indicated that millions of Uyghur births will have been prevented in the next two decades.