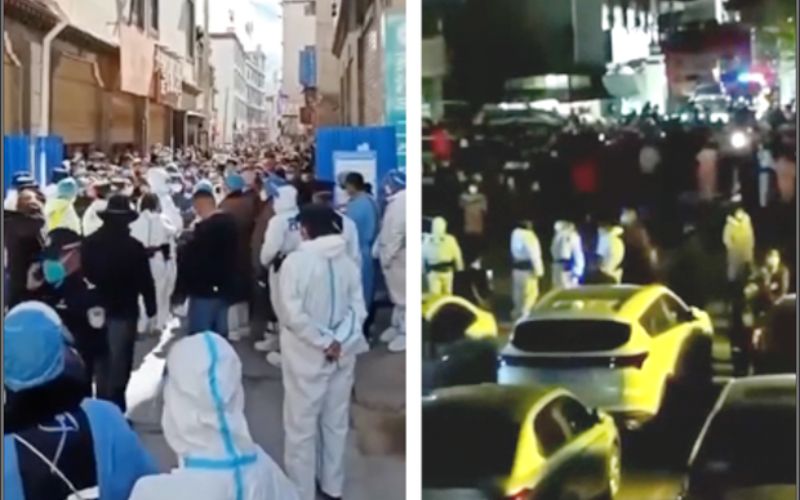 Videos showed thousands of people wearing masks stood in front of rows of police wearing white suits with plastic riot shields. After a protester grabbed a metal pole that had been used to hit him, police kicked him and hit him with clubs. The footage's creators claimed that it was shot at the location.

After thousands of employees walked out of the factory in the central city of Zhengzhou last month in response to complaints about unsafe working conditions, Foxconn, the largest contract assembler of smartphones and other electronics, is having trouble filling orders for the iPhone 14.

Recently, protests against China's authoritarian lockdowns had also taken place in Occupied Tibet. In the midst of the Zero-Covid Policy in Tibet, 200 residents of the country's capital, Lhasa, were detained as a result of massive protests against lockdowns that restricted many people to their homes without providing them with adequate food or medical care.

According to an employee named Li Sanshan, protests began on Tuesday after employees who had traveled considerable distances to take jobs at the factory complained that the company altered the terms of their pay.

After seeing an advertisement promising 25,000 yuan ($3,500) for two months of work, Li said he quit his catering job. That would be substantially more than the average wage for this kind of work in the region.

According to Li, the company informed new hires that in order to receive the 25,000 yuan, they would have to put in two more months of reduced work.

He stated, "Foxconn issued very enticing recruiting offers, and workers from all over the country came, only to find they were being made fun of."

The protests come amid severe frustration over Covid restrictions in areas across China that have closed shops and offices and confined millions of people to their homes.

Worldwide, Foxconn is responsible for 70% of iPhone sales. It has smaller production facilities in India and southern China, but its Zhengzhou plant produces the majority of its phones.