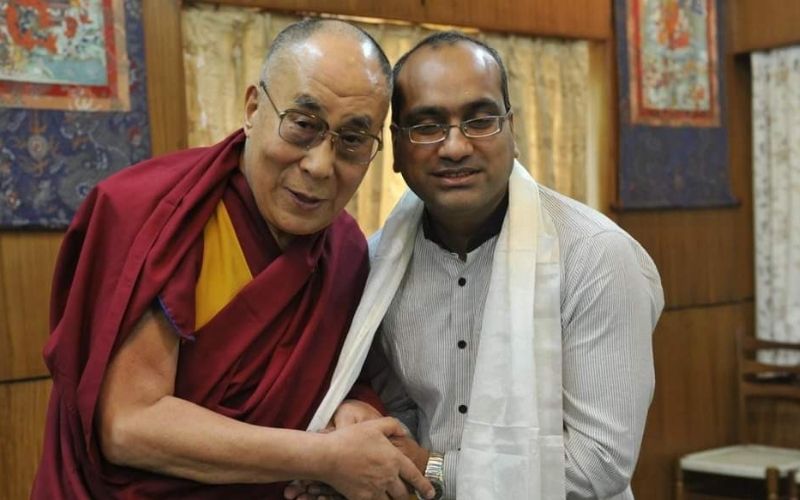 Ancient Wisdom In A Modern World: HH The Dalai Lama And His Teachings

This 6th of July marked the 87th birthday of His Holiness, the 14th Dalai Lama, Tenzin Gyatso. Birth anniversaries serve as reminders for us to cherish the noble ideas that such giant figures have stood for. His Holiness is no exception. He has always promulgated and propagated the ideas of world peace, ‘reverence for all living things and the idea of a universal responsibility that embraces both man and nature’, as the Nobel Peace Prize Committee observed when awarding Him the Nobel Peace Prize in 1989. His words on that momentous occasion embody selfless humanitarianism, and utmost humility, “I believe the prize is a recognition of the true values of altruism, love, compassion, and non-violence which I try to practice, in accordance with the teachings of the Buddha and the great sages of India and Tibet”.

Two things strike me distinctly as relevant to our modern times as I reflect on His ideas, actions, and preaching: one is the idea of non-violence in the face of unfettered repression (in his native land of Tibet) and the other, the progressive mindset he bears when the world is increasingly associating redundant and stagnant ideas with religion. In this piece, I propose to elaborate on these two themes and draw parallels with His words in His Nobel Peace Prize acceptance speech – they coincidentally happen to be the same.

It is common knowledge that China cunningly launched an attack on Tibet in the 50s when nowhere in historical documentation has Tibet been a part of China. The 17-point agreement was shoved on the lives of Tibetans. Once Chinese suzerainty took over the lives of innocent Tibetans, an uprising was imminent. It is indeed unfortunate that the then-political dispensation in India couldn’t read through the malicious intents of the Chinese.

The Chinese, promised complete autonomy to the religious practices in Tibet, in the 17-point Agreement; yet their capture of the Panchen Lama is clearly in contravention to their own words. Despite the unbridled control the Chinese exercise over Tibet, His Holiness has never shied away from striking peace with China. He has repeatedly sought only autonomy, even willing to sacrifice sovereignty, an undisputed right of Tibetans.

It is striking to me because it reflects a fundamentally distinct cosmopolitan view of humanity that irrespective of the borders we create, we are members of the larger human race endowed with this beautiful earth. “No matter what part of the world we come from, we are all basically the same human beings. We all seek happiness and try to avoid suffering. We have the same basic human needs and is concerns. All of us human beings want freedom and the right to determine our own destiny as individuals and as peoples. That is human nature.” These words in His acceptance speech clearly reflect in His actions.

Today, the relations between countries are dictated by realpolitik and unflinching pragmatism, and I do not deny that these are crucial in an increasingly insecure world. But it is only to the collective benefit of the world when we contemplate on the words of His Holiness, recognizing our oneness above all else. This idea stems from religious wisdom, the second part on which I wish to focus.

In an increasingly polarized world, religion has come under scathing attack from the so-called secularists and atheists. Its ideas have been treated as redundant and conservative. Yet, Hinduism and Buddhism have nothing but progressive ideas in its tenets. As His Holiness recognized, “people inflict pain on others in the selfish pursuit of their happiness or satisfaction. Yet true happiness comes from a sense of brotherhood and sisterhood. We need to cultivate a universal responsibility for one another and the planet we share.”

What His Holiness propagates is the intertwined complementarity of religion and spirituality in our lives “with the ever-growing impact of science” for they remind “us of our humanity”. His comradery with different religious leaders only augments His conviction. The scientific community has continuously highlighted the adverse effects of human greed on climate change. His Holiness’ spiritual teachings, for example urging his followers to refrain from consumption of non-vegetarian food, are only a step in the same direction. He, in my view, has been a testimony to the relevance of religion and spirituality in a world which has only become increasingly skeptical of the two.

Freedom is an essential human nature. And today, the world is increasingly reverting to suppressing this rudimentary sentiment. Internationally, countries still seek dominance over one another. There is limited collective action on issues which press all of humanity equally. This equilibrium can only be gotten out of when we recognize the tenet of universality that His Holiness has always preached about. This principle of universality is the best reminder for us on His birthday.

(Shri Sujeet Kumar, Hon’ble Member of Parliament, Raj Sabha from Odisha is also the Convener of the All-Party Indian Parliamentary Forum for Tibet.)