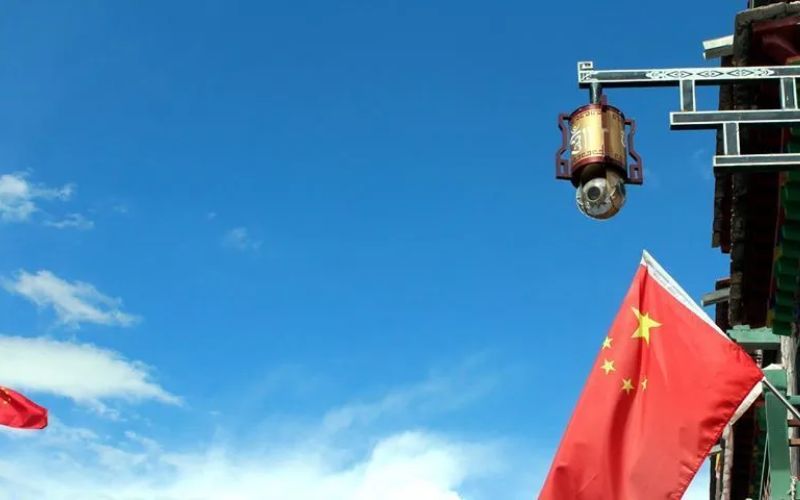 Big Brother is Watching You: Surveillance in Tibet

Lately, there has been a lot of discussion about the use of surveillance by China in occupied Tibet.  Thanks to reports by Human Rights Watch and Citizen Lab, we now have compelling information about how CCP has been systematically taking DNA samples from Tibetans, including children as young as five. Chinese authorities have tightened their control ever since the widespread protests by Tibetans in 2008 demanding the return of His Holiness the Dalai Lama. The Chinese Communist Party (CCP) authorities have been enforcing a model of social control to suppress Tibet and encourage the forced assimilation and Sinicization of Tibetans.  What sort of surveillance techniques are being used in Tibet and why should they be called out?

Did you know that Tibet is one of the most surveilled places on earth? This is because the Chinese government wants to control every aspect of Tibetan culture, religion, and politics. The Chinese government keeps tabs on Tibetans through a variety of techniques - they ask local government officials to report political crimes,  listen to phone conversations, profile DNA, install 5G and ban WeChat to monitor everyday life in occupied Tibet. There are also limits on where Tibetans can go and what they can do.

Surveillance cameras are present in many public places. This makes it difficult for Tibetans to have any conversation about (what CCP identifies as) “sensitive” topics, such as politics or religion. The region is flooded with Chinese security cameras and facial-recognition technology, converting it into a security state.  The same surveillance cameras are used to monitor and regulate traffic in the city, further restricting the Tibetans' freedom of movement. The Chinese government also censors Tibetan publications to stop the flow of what they perceive as “politically sensitive” information. In addition, Beijing is also using 5G technology to “speed up the collection and analysis of data” in Tibet.

Recent reports have suggested that China has established dozens of overseas police stations in nations around the world. These stations could be used to track and harass dissidents as part of Beijing’s crackdown against dissent.  China has reportedly established at least 54 such police-run overseas service centers across 5 continents - 4 in North America, 36 in Europe, 5 Asia, 6 in South America and 3 in Africa. China calls it ''overseas service centers' ' which purpotedly help Chinese citizens renew documents.

According to Free Tibet, HikVision is the world's largest manufacturer of video surveillance equipment, and it is owned by the Chinese government. In recent years, the Chinese government has used the expertise provided by Hikvision's global success to support the establishment of a massive surveillance state. According to reports, Hikvision is also used in Qinghai-Tibet Railway which is the highest elevated railway all over the world with the average elevation of about 4,500 meters above the sea level.

China also used COVID19 outbreak to improve its mass surveillance capabilities. It found in COVID19 a perfect opportunity to tighten its control and surveillance over the region ahead of its 20th Party Congress. Lockdown rules and high surveillance ensured that there is no public display of anger ahead of its celebrated event.

The "Grid Management" and "Double-Linked Household" systems, among other forms of mass surveillance and data gathering, require individuals to report suspicious activity and betray one another or face consequences. People in villages are divided into separate smaller groups and locals are turned to “volunteers” to support the surveillance system in place. The double linked household systems force households to report on each other.

The infamous nomad relocation scheme also allows CCP to relocate Tibetan nomads from their original habitats to concrete settlements where it is easier for the authorities to control their movement and strengthen the surveillance.

As part of China's implementation of a cutting-edge technological system for border surveillance, drones are also being put to use. In the past, it was also reported that drones were used extensively to monitor Tibetans' movements as they attempted to cross the Himalayan mountains on their way to India or Nepal from CCP-controlled Tibet. By using drones, facial recognition, and radar to secure an already nearly impassable border, the Chinese government has tightened its grip on Tibet.

According to reports, Chinese scientists are constructing a meteorological monitoring station in the Himalayas on Mount Everest, the world's highest peak at over 8,848 meters, raising concerns about further exploitation of Tibet's minerals and resources. China might have discovered lithium sources close to Mt. Everest, according to recent reports. It appears that China is intensifying its surveillance and monitoring strategies in the Himalayan region with the establishment of weather stations, the use of meteorological drones, and an increase in expeditions to Mt. Everest.

China is arresting Tibetans for just contacting overseas friends and family. At the same time, there is surveillance of WeChat, which has been linked to an alarming surge in Tibetan arrests. China is using WeChat as a medium of surveillance on Tibetans in Tibet. 70% of Tibetans living abroad use the app. Since other international social media platforms are blocked in the area, overseas Tibetans and anybody else with ties to Tibet frequently use the messaging app to stay in touch. WeChat is destined to become more mandatory in the everyday lives of many Tibetan people, one woman who recently arrived in India told Tenzin Dalha (A research fellow at the Tibet Policy Institute).

According to Human Rights Watch, Chinese officials are dramatically stepping up their policing, including the arbitrary collecting of DNA from citizens in numerous cities and villages across the Tibet Autonomous Region (TAR). According to a report from the Lhasa municipality in April 2022, blood samples for DNA collection were routinely gathered from neighborhood inhabitants and children attending kindergarten. According to a report from a Tibetan municipality in the province of Qinghai in December 2020, all boys between the ages of 5 and 17 had their DNA gathered.  DNA contains extremely sensitive information that might be used to permanently and uniquely identify a child, their family, and any inherited medical diseases that might cause disability or other serious health issues.

These mechanisms are set to strengthen given the developments in technology and China’s growing repression in the occupied territory. For instance, Chinese government has recently set up a new center for big data operations in Lhasa, raising fear among analysts and human rights experts this could be another means of monitoring or increasing policing of the local population.This needs to be called out and the global community should hold CCP accountable for its grave crimes against humanity in Tibet, as in Xinjiang where Uyghurs are subjected to torture and systematic state-organized mass imprisonment and persecution. Tibetans, in their own homeland, are forced to live in corrosive fear and this Orwellian nightmare needs to end.